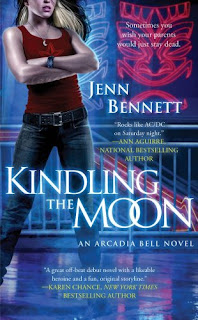 
A new urban fantasy series about a magician and daughter of accused serial killers who must clear their names—or pay for their crimes with her life.

Being the spawn of two infamous occultists (and alleged murderers) isn’t easy, but freewheeling magician Arcadia “Cady” Bell knows how to make the best of a crummy situation. After hiding out for seven years, she’s carved an incognito niche for herself slinging drinks at the demon-friendly Tambuku Tiki Lounge.

But she receives an ultimatum when unexpected surveillance footage of her notorious parents surfaces: either prove their innocence or surrender herself. Unfortunately, the only witness to the crimes was an elusive Æthyric demon, and Cady has no idea how to find it. She teams up with Lon Butler, an enigmatic demonologist with a special talent for sexual spells and an arcane library of priceless stolen grimoires. Their research soon escalates into a storm of conflict involving missing police evidence, the decadent Hellfire Club, a ruthless bounty hunter, and a powerful occult society that operates way outside the law. If Cady can’t clear her family name soon, she’ll be forced to sacrifice her own life . . . and no amount of running will save her this time.

Oh how I loved KINDLING THE MOON I don't know if I can count all the ways.  Two words really describe my feelings "LOVED it". I was hooked from the first page. Arcadia aka Cady is Sassy, independent, and all around bad ass. Cady is a human magician with special talents that no others seem to have. She is in hiding for a crime that her parents were accused of committing and hasn't told anyone who she is until Lon Butler came along. He is twenty years older then Cady is and I just cant picture that. Not because I cant see her dating someone older but his personality just doesn't seem that much older to me. The attraction and sexual tension between the two is seriously off the wall. Lon has a teenage son Jupe and him and Arcadia get along from the beginning. I love all of their relationships together and Jupe really comes off as being a fantastic down to earth kid, I cant imagine the story without him. The pacing of the story was perfect. Information was dulled out at the perfect times and in the perfect ways. The world building was superb. The story was fun and original, Its current day but the world is filled with earthbound demons that unless your in the know blend in perfectly with society. The twist and turns came at every intersection of the book and threw you through a loop. I started to suspect some things but the reveal was powerful and emotional all the same. The characters were all wonderfully written. I cant think of one thing I didn't like about the book, I didn't want to put it down. I can not wait to see what Jenn writes next!!