Review: From the Ashes by Amber Lynn Natusch 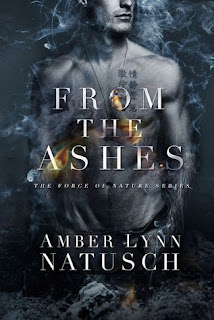 
FROM THE ASHES is the first book in a new series by author Amber Lynn Natusch.

In FROM THE ASHES we meet and get to know Piper. She has lived with many different factions in the paranormal community, but has never fit in and some of the factions even hate her. She thought she found her home with the vampires, but once again, she was wrong and she finds out she is no longer safe there. Piper thinks herself weak and in need of protection. I did like her and easily connected with her character, but I wish she would have come out of her weak shell a little sooner in the book as I thought she was pretty strong to have survived the things she did. She needed to trust herself more.

ROM THE ASHES wasn't lacking in the danger and action department. Both were around every corner and they were both some of the most enjoyable parts of the book.

One of the things that I wasn't crazy about was the insta-love parts of two different relationships. They both happened really fast and even with the circumstances that had her fleeing Merc and her life, she sure did fall fast for Knox after being so in love with Merc. Love shouldn't be that interchangeable. Now having said that, I did like both men. They both have things I love about them and they both fit nicely with Piper. Speaking of running from Merc, she left the only people she thought of as family without any thought as well and without letting them know she was ok. That rubbed me the wrong way.

All I know after reading FROM THE ASHES is that I enjoyed the story and after the ending events things will definitely be interesting in book two.