UFI welcomes Amber Argyle Author of Witch Song. Thanks for Joining us!!
Character Interview: Brusenna
If someone asked your best friend "Who is Brusenna?" what would they say?

From Joshen: If you want to understand Brusenna, all you have to do is listen to her sing. She has the most beautiful, haunting voice. Like she’s longing for something she knows she’ll never have But you’re listening to her and you can hear what she can’t. The underlying strength. And as the song goes on, you realize you never want it to end. That you’ll do whatever in your power to keep her safe from harm. Follow her anywhere just to be near her. She’ll never understand why, and you won’t convince her of the power she holds in a single syllable. Somehow, that innocence—that humility—only makes her more alluring.

Why are you an untrained witch?

I didn’t know I was untrained. I’ve had voice lessons as long as I can remember. And I’ve always sung to the plants. I suppose where I’m untrained is in fighting with my song. Mother only taught me songs of growth and life. She knew my song was strong enough to challenge the Dark Witch. She didn’t want the burden of defeating the Dark Witch placed on my young shoulders.

Where do you live?

I grew up outside a village called Gownstower in the center of the Nefalien city states. They hate my mother and I because we are Witches. They blame us for every failed crop, every early frost. They don’t understand that ordering the seasons is more like controlling a half wild colt than ordering a side of beef from a butcher.

What is your favorite thing to do?

Sing. I’ve never felt so connected to anything, as when I sing to a plant and watch it grow from a tiny seed to a full grown plant within a matter of moments.

Is there anything else you can tell us about yourself to help us know you a little better?

I’m really not that interesting. I’m short, with dark gold hair and eyes. I’m quiet and would rather be by myself or with Joshen than anyone else. I don’t trust people easily—I’ve been hurt too many times. I hate bugs—especially spiders. And I’m one of the few people alive who’s survived the transition from a human into a seal.

Amber Argyle grew up with three brothers on a cattle ranch in the Rocky Mountains. She spent hours riding horses, roaming the mountains, and playing in her family’s creepy barn. This environment fueled her imagination for writing her debut novel.

She has worked as a short order cook, janitor, and staff member in a mental institution. All of which has given her great insight into the human condition and has made for some unique characters.

She received her bachelor’s degree in English and Physical Education from Utah State University.

She currently resides in Utah with her husband and three small children. 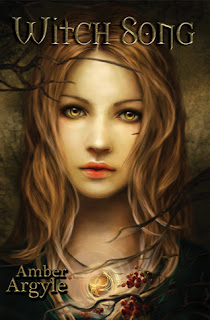 Tues Sept 13
After Obsession by Carrie Jones, Steven E. Wedel
Blood and Other Cravings by Ellen Datlow
Dark Passage (Dark Mirror, #2) by M.J. Putney
Drink, Slay, Love by Sarah Beth Durst
Fateful by Claudia Gray
Frost by Marianna Baer
Hunted (The Shadowing, #1) by Adam Slater
Modelland by Tyra Banks
So Silver Bright (Theatre Illuminata, #3) by Lisa Mantchev
Thurs Sept 15
As I Wake by Elizabeth Scott
If you notice a mistake or see anything missing let me know. Happy Reading =)
Posted by StacyUFI at 3:00 AM No comments: