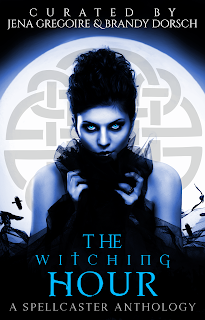 Embark on a spellbinding journey with this collection of paranormal short stories dedicated to magic-wielding masters of the mystical arts. Armed with ancient power, they need only whisper arcane incantations to bend reality to their every desire.

THE WITCHING HOUR, the second action-packed anthology in the Summer of Supernaturals series featuring witches, warlocks, djinn, and more from six of today’s best urban fantasy and paranormal romance authors.

The SUMMER OF SUPERNATURALS Series

A 4-Part Anthology Series Dedicated to the World of the Supernatural!

About THE WITCHING HOUR Authors

Debra Elise lives with her husband and their two sons in the beautiful Pacific Northwest. She is an Autism advocate, stay at home mom, full time writer, and is always on the lookout for inspiration in all its forms. She will release two more books in her Outlaws of Baseball series, MANAGING BLAKE and the final book in the series, LOVING NOEL, in 2018.
She is also writing in the paranormal romance genre. Stay tuned for more book info on this project.
Sharing what motivates her is a life passion (a close second to writing romance of course). A self-proclaimed extroverted introvert, when not writing or procrastinating, she enjoys hanging out with other author-type individuals and teasing her three ‘boys’ into displaying their killer smiles. Visit Debra at debraelise.com
Most days find her carpooling, avoiding laundry and spending too much time on Facebook and Twitter, and Pinterest, and Instagram. She will soon be starting a self-help group for social media addicts-maybe.

Born and raised in Albuquerque, New Mexico in 1977, DJ Shaw was 17 before she was able to see most of the United States. When she was 17, she decided to join the fair, traveling with them to Texas, Oklahoma, and Louisiana. Once the fair arrived in Lake Charles, DJ had decided it was time to go home, that she had had enough of traveling with the fair. She much rather preferred to sit around writing, or even telling, the lives of the people who lived in her head. She had been good at story-telling from the time she was about ten, when she scared herself so bad with her story of the Boogey-man that she couldn’t move off her bed. Her siblings would come to her for their scare fix, because they knew she could come up with something on the spot.
Having found what she loved to do at an early age, she continued to write down her stories and any poetry that came into her head. She had stacks upon stacks of notebooks filled with her work. Her love of horror movies made her stories that much more chilling.
When she’s not writing, she’s listening to music, supporting her favorite adopted brother and his band “Traveler in Pain”, playing with her five children, spending time with her husband of seven years or watching horror movies in the middle of the night just for the scare factor.

Grace White is the paranormal pseudonym of romance writer, L A Cotton.
She resides in the UK with her family, and lives for binge watching series on her Firestick, losing herself in a good book, and reliving her younger days through trashy teenage movies … not necessarily in that order.

Pepper McGraw wishes she were a shifter, but since she wasn’t lucky enough to be born that way, she chooses to write about them instead. She’s an advocate of animal rescue and supports local shelters and Trap-Neuter-Release programs for feral cats. She has had the supreme honor of winning occasional head butts and meows from the local ferals in her neighborhood and even of convincing a few to come inside and adopt her as their own.

A book hoarder and coffee addict by heart Anna Bloom loves to write extraordinary stories about real love. Based south of London with her husband, three children and a dog with a beard, Anna likes to connect with readers, fan girl over her favourite authors and binge watch Supernatural while drinking lots of wine.

Kat Parrish is a former reporter who prefers making things up! An Army brat, her motto is “Have passport, will travel.” She has lived in seven states and two foreign countries and would love to celebrate her 100th birthday with a trip into space. She lives in the Pacific Northwest near a haunted cemetery.

To celebrate the SUMMER OF SUPERNATURALS anthology series, we’re giving away a $50 Amazon gift card to four lucky winners!

GIVEAWAY TERMS & CONDITIONS:  Open internationally. Four winners will each receive a $50 Amazon gift card. This giveaway is administered by Pure Textuality PR on behalf of PTPR and Paranormal & Urban Fantasy Book Bargains.  Giveaway ends 8/31/2018 @ 11:59pm EST. Pure Textuality PR will send the prizes to the winner via email. Limit one entry per reader.  Duplicates will be deleted.  CLICK HERE TO ENTER!