UFI welcomes J.A. Garland. Thanks for Joining us!!

If someone says the root of all evil is money, they’ve never met a witch. Hot on Tara Sobrantes heels, I hungered for a quick capture. But my past experiences with brimstone-users had taught me not to eat the candy house until Gretel had heated the oven. The permanent fireball scar on my right butt cheek reinforced the lesson.

Capitalizing on a rare break in the rain, I peered through the branches and foliage I’d arranged to obscure my position in one of the Pacific Northwest’s oldest forests. Drawn to the sweet scent of exhaled carbon dioxide, a deer fly landed on my cheek. I flicked away the bloodsucker while keeping my gaze on a distant group of figures.

Three hundred feet away, the Mystic Monks began another round of tiresome morning rituals. For four lousy days I’d watched them worship their gods. Watched, waited and shivered through one bone-chilling downpour after another. I knew Tara was hiding at the monastery. While I might not have her yet, or the large bounty she’d fetch from shirking a loan shark, I was still in the game.

A man wearing a burgundy cloak ventured away from the others, heading deeper into the woods. He glanced around, perhaps to confirm he was alone, and then crouched until he almost sat. The monk lifted the hem of his woolen robe, carefully draping the material over his knees. I scrunched my nose and started to look away when something caught and held my eye. A steady stream of yellow wet the thick carpet of pine needles between his feet. The men I’d known didn’t squat when they pissed—I got you, Tara.

I stood, careful not to make a sound. In the tight cat suit I wore, the movement caused the plastic edge of my Para Hunter identification card to poke my hip. A practiced shake released two Fae kissed, silver blades from their leather holsters and into my hands. Blades were good for close combat, not for the gap I currently faced. With well placed, gliding steps, I narrowed the opening between us.

Finished urinating, Tara rose, letting the hem of her heavy robe fall. I quickened my pace, I couldn’t afford to lose her bounty. My brother was all the inspiration I needed to complete this job.

A scream pierced my thoughts and the damp, morning air. The pressurized wail thickened then transformed into a muted gurgle. Tara’s hood fell backward, revealing a bobbing metal shaft protruding from under her jaw. Someone, not me, had launched an arrow into her throat.

Move! I lunged forward, feet slipping as my boots sought purchase on the slick ground. Razor sharp, a barb sliced through my suit and lodged into the skin and muscle of my shoulder. The force of the arrow shoved me backward and to the ground. An instantaneous, moor-like sweat coated my skin.

My nostrils flared like a wounded animal, and I scrambled to my feet. Normally, I’ll stubbornly stand my ground, but I’m not stupid. My attacker knew my position, and I didn’t know his. If I stayed put, he’d fill me full of metal like a scrap yard.

Racing away in a crazy zigzag, I heard near noiseless whispers as the air parted, making way for a barrage of arrows. Bolts lodged into the trees all around me, at head level. Yes, someone wasn’t trying to scare me off. Someone wanted me dead. Not here, not now. Not when my brother and his family were counting on me.

Bites of pain skewered my arms, then a leg. The cold cramp of fear tightened its hold on my lungs. Holy shit, I was going to die. Adrenaline driven, I pushed forward long after my wounds should have dropped me.

A misty fog had descended on the dense pine canopy when I finally allowed myself to stop running. I sank to the ground at the base of a tamarack pine. In unison, my muscles and lungs screamed a tortured ditty, whose tune I was hella familiar. I need a new profession or I’m not going to make it to my thirtieth birthday.

Blinking, I tried to focus eyes blurry with tears. I had officially accepted Tara’s mark. For two weeks she was supposed to be off limits to all other Para Bounty Hunters. That was the unwritten code. Someone violated that code, and that someone was here. They’d killed her and tried the same with me. Who? Why?

And how had they found Tara? Some might call it cockiness, I called it first class investigation skills. I was positive that I alone figured out the connection between brother and sister. Tara had blended in seamlessly with the monks. It took me days in that damn hidey-hole to catch her slip.

Lids closing, I slowed my breathing. Trading pain for awareness, I listened to the steady dripping that came from the pine needles above. Morning dew ran down the rough grooves in the bark. A crackle here, a chirp there, then quiet. Head bowing to my chest, minutes spooled by. A long, low howl broke the quiet, followed by another, then another--young, excited yips joining in.

J.A. is a full time firefighter in California, an addicted trail runner, a connoisseur of all things cheese puff, and an urban fantasy author. When she isn't slogging through the obstacles at a mud run, you can find her hunched over her computer unleashing demons, vampires, and werewolves upon the world. 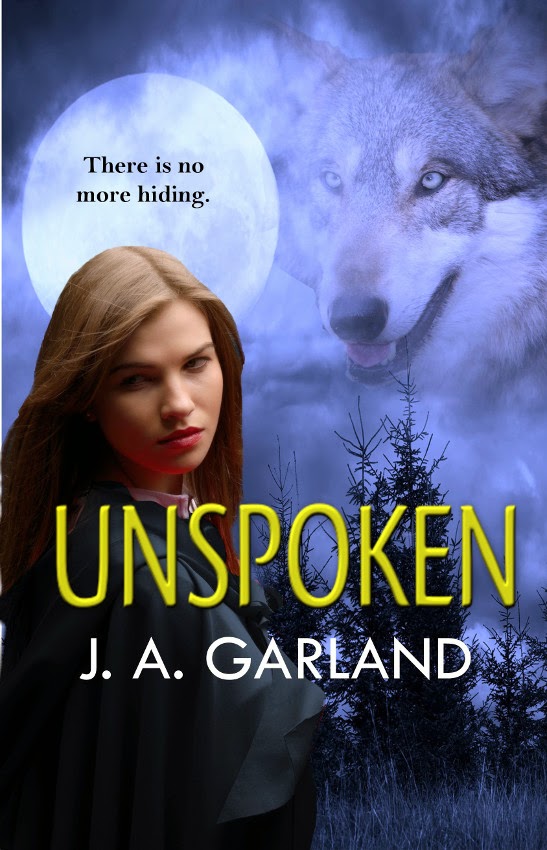 
Paranormal Bounty Hunter Myka Quinn has left her failed attempt at wolf pack life behind. She’s focused on providing for her brother and staying out of werewolf territory.

When she’s framed for a witch’s murder, she must accept help from a very unlikely source, or watch the lives of those she loves rip apart.