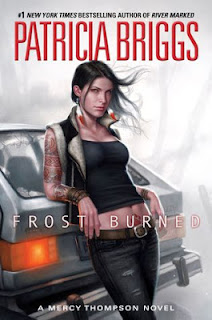 Mercy Thompson’s life has undergone a seismic change. Becoming the mate of Adam Hauptman—the charismatic Alpha of the local werewolf pack—has made her a stepmother to his daughter Jesse, a relationship that brings moments of blissful normalcy to Mercy’s life. But on the edges of humanity, what passes for a minor mishap on an ordinary day can turn into so much more…

After an accident in bumper-to-bumper traffic, Mercy and Jesse can’t reach Adam—or anyone else in the pack for that matter. They’ve all been abducted.

Through their mating bond, all Mercy knows is that Adam is angry and in pain. With the werewolves fighting a political battle to gain acceptance from the public, Mercy fears Adam’s disappearance may be related—and that he and the pack are in serious danger. Outclassed and on her own, Mercy may be forced to seek assistance from any ally she can get, no matter how unlikely.


We are back in the Tri-Cities, Adam and the pack have been kidnapped and Mercy is doing everything in her power to get them back. There are plenty of twists and surprises along the way.

Mercy is kick ass and has turned into one of my favorite female heroine's. For most of FROST BURNED Mercy is on her own and I really enjoyed seeing her in action again. As always I love Mercy and Adam's relationship, they fit well together. A lot of our favorite characters make an appearance in book 7 and some have to take a more back seat role while certain politics play out in the background.  It was interesting to have Adam's POV for a few chapters in FROST BURNED. I love being inside Mercy's head but it was a nice little twist. There was also some nice bonding with Jesse. They were already close but with Jesse getting older it was nice to see them getting closer. I would also like to mention I love the cover!!

FROST BURNED brought us plenty of action, danger, humor and things to ponder for the future. All of the characters in the series have developed nicely and the story line's never stop entertaining me. I hope there isn't another two year wait ahead until the next Mercy novel but no matter the length of time it takes I'm a fan until the end.