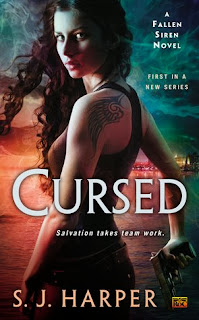 Meet FBI Agents Emma Monroe and Zack Armstrong.
She's cursed. He's damned. Together, they make one hell of a team.

Emma Monroe is a Siren, cursed by the gods and bound to earth to atone for an ancient failure. She’s had many names and many lives, but only one mission: redemption. Now that she works missing persons cases for the FBI, it could be just a rescue away. Unless her new partner leads her astray.

Special Agent Zack Armstrong just transferred into the San Diego Field Office. He’s a werewolf, doing his best to beat back the demons from his dark and dangerous past. As a former Black Ops sniper, he’s taken enough lives. Now he’s doing penance by saving them.

Emma and Zack’s very first case draws them deep into the realm of the paranormal, and forces them to use their own supernatural abilities. But that leaves each of them vulnerable, and there are lines partners should not cross. As secrets are revealed and more women go missing, one thing becomes clear: as they race to save the victims, Emma and Zack risk losing themselves.


Emma is a very very old Siren. She has walked the earth cursed by the Goddess Demeter for failing to her daughter Persephone. She is not allowed to love a man or he will die at the Goddess' hands and she must save woman until Demeter considers her debt paid.

Emma is an agent with the FBI. Being a Siren lets her solve missing person cases faster but of course nobody knows that. She worked with Zack on an out-of-state case in the past. She knew he was a werewolf right away, they got very close and she made it clear that she did not want a relationship with him. She thought about him often but thankfully he was states away. That is until he shows up as her new partner. No matter how much she tries to keep their relationship professional it just is not happening. They have electric chemistry and are drawn to each other. This is strictly because I am a romantic at heart but I was disappointed with the ending events. *sad face* Just not fair. I know the events will be revisited and it's not anywhere near over but Demeter is a uber biatch and I want to punch her. Sorry, books make me violent.

I enjoyed the case they worked on together. The case came together at a nice pace and the paranormal elements of the missing made it even better when all was revealed. Emma's best friend was a great supporting character that I know will continue to be a breath of fresh air in the middle of any disaster that is thrown Emma's way. There is a bit of Greek Mythology going on but not as much as I thought there would be so I am interested in seeing if the authors will dive into that more. I think any Urban Fantasy Fan will enjoy CURSED and I will picking up book 2 when it comes out.