UFI welcomes Carolyn LaRoche. Thanks for Joining us!!

I love goldfish. I have one that is nine years old and she is huge- nearly six inches long. Her name is Goldie and she is a bully to her tank mates. My students love watching her chase the other fish around.

With two sons who baseball, I don’t have a ton of downtime and what little I have is usually spent writing. I dabble a little in crochet but I am not good at it, it mostly just gives my hands something to do when I am sitting at the fields watching a double header. I also love to read and try new recipes. Not very exciting I guess but it appeals to my creative side.

The escape it provides. When I write I totally lose myself in the action of the story and I forget for a while about all the things that are usually on my mind.

Before I can sit down and be productive, I must procrastinate in every way possible. From doing laundry to checking my email, I can never just sit down and write something without first making sure everything else I can possibly do first is done. Once I do that, I am good to go and can easily turn out several thousand words.

I absolutely loved Gena Showalter’s Atlantis Series. I read all the books in a week I think. I am also a big fan of Kerrelyn Sparks’ Love At Series. She has a great sense of humor and her brand of storytelling almost has me convinced that kind vampires live among us!

How would you pitch Witness Protection to someone who has not heard of it before?

Can you tell us a little bit about the world that Witness Protection is set in?

Witness Protection is a contemporary story set in the beautiful Blue Ridge Mountains of Western Virginia.

Do you have a favorite scene in Witness Protection?

The scene I love most is when Logan takes Angelina to meet his Aunt Clara, the woman who raised him after his mother died. She is a speak her mind, take no prisoners kind of woman who thinks the world is going to hell in a hand basket. When Logan and Angelina pull up in front of her hidden mountain home, Clara greets them waving a shotgun and threatening to blow them away. Angelina, a former NYPD cop, hits the ground to avoid being killed but Logan just starts laughing. Apparently Clara forgot to put her glasses on that morning and she is as good as blind without them.

Aunt Clara was my favorite because writing her gave me license to “say” the things most people only think. The things that come out of her mouth make me laugh out loud. I think I struggled most with Angelina because she doesn’t necessarily think like I do.

I am currently working on the second book to Witness Protection that centers around Logan’s cousin Kaiden.  I also have a book that is due out from Breathless Press sometime in the spring. It’s the first in a new series about women married to cops who dabble in extracurricular activities that border on illegal and wind up getting involved in things like murders and kidnappings.
__________________________________

Carolyn LaRoche grew up in snow country but fled the cold and ice several years ago. She now lives near the beach with her husband, their two boys, two finicky cats, and one old dog. When she is not at the baseball field cheering on big hits and home runs, she is busy teaching science to unwilling teenagers. She is co-author of the book The Crazy Lives of Police Wives and hangs out online at both Carolyn La Roche - Author and The Crazy Lives of Police Wives.

She also writes a blog titled Boys, Badges and Writers Block about the joys and challenges of raising boys and living the law enforcement wife life found at http://boysbadgeswritersblock.blogspot.com/ 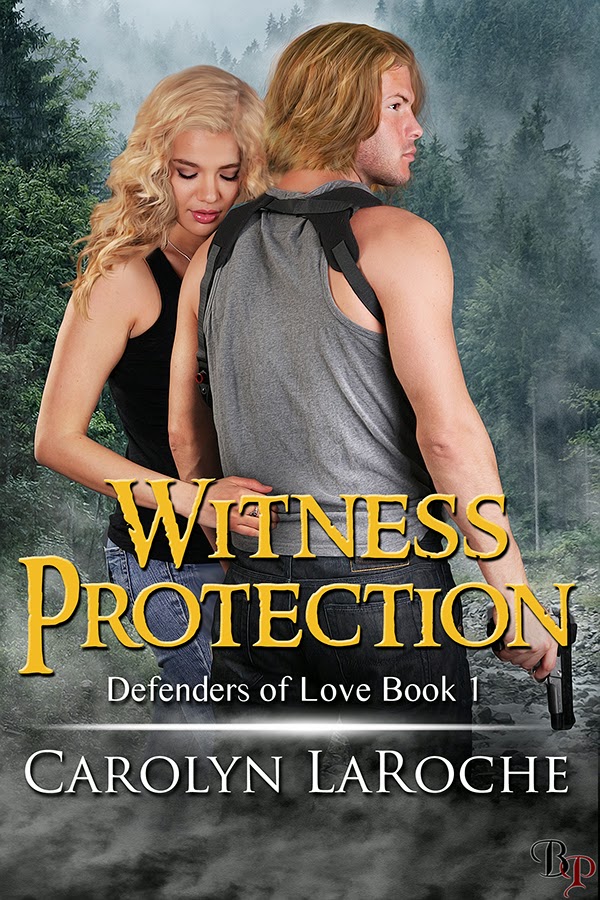 
Someone wants Angelina dead...again. Will following her heart put her in danger, or in the arms of the man she's meant to be with?
As far as the world knows, NYPD detective Angelina Ferrara died in a violent firefight on Chelsea Piers over a year ago. Living in the witness protection program as history teacher Lucy Taylor was supposed to save her life, but being alive and living were two very different things. Until she meets Detective Logan James when he goes undercover in the same private school where she works. Something about the handsome man with the gorgeous blue eyes piques her interest. There's no doubt he has secrets...but then so does she. When the Ricci crime family discovers she's still alive, she finds herself on the run with Logan. Her heart led her astray before. Can she trust it to let Logan help her survive?

Her little car had an engine about as powerful as a hamster wheel. There was no way she was going to outrun the truck that was accelerating with lightning speed. On one side of her was a deep ravine, the other the steep slope of a mountain towered high and tree covered. The steering wheel vibrated as she pushed her little car to its limits, sheer adrenaline keeping her focused on the winding road. As she rounded a sharp curve, the back tires spun and fishtailed out from behind her. The tiny car shook violently as Lucy struggled to maintain control. The SUV caught up with her then, ramming into her rear bumper. The car groaned but held on. Lucy spun the wheel to make the next sharp curve, all the while her eyes searched for a way off the dangerous mountain highway. Another crash from behind jolted her car forward with such force Lucy lost her grip on the steering wheel. The car veered right but she managed to straighten it out before hitting the tree line.

"What the hell do you want with me?" she screamed at the truck in her rearview mirror.
The driver responded by slamming into the back of her car again. Metal ground against metal, gravel flew everywhere, and the car careened toward a thick bank of trees to her left. Straightening the car once more, Lucy crushed the gas pedal to the floor and watched as the speedometer climbed quickly. Lucy felt the little rush of excitement she always got in a good pursuit despite the fact that she was the one being pursued.

She whipped around yet another curve, and the SUV caught up with her. Just as she managed to get her little car under control again, the SUV crashed into her back end again with such force Lucy thought her car might shatter there in the middle of the road. The little car veered to the right, aiming straight for the side of the road and the ravine beyond. Lucy tried to regain control but the effort was in vain. She braced herself as the car plowed through thick vegetation, hit something, and started to slide down the steep embankment.

She heard the growl of the SUV's engine roaring away over the revving of her own engine as the tiny car crashed through the underbrush. The car flew over a log and landed on the slick vegetation covering the incline. The car lost its hold on the ground and rolled its way down the slope, finally landing up against the trunk of a large pine tree where the engine died. Lucy's head smacked against the steering wheel knocking her near to senseless. Everything fell deathly silent as she fought to remain conscious.

A loud crack broke the silence. As she watched through the broken windshield, the tree in front of her began to wobble. Blood trailed from her forehead into her left eye, blurring her already shaky vision. Rubbing at it with the back of her arm, she used her other hand to desperately claw at the seat belt release.

If she didn't get out of the car, the tree was going to fall right on top of her.

The giant pine swayed once and then began its descent toward Lucy and her crumpled car. Yanking hard at the jammed seat belt, her head swimming and her stomach churning, Lucy finally freed herself. Just as the tree crushed the roof of her car, like it were nothing more than a tin can, Lucy pulled her body through the opening that used to be the driver's side window.

Cracking wood and crunching metal stirred up a cacophony of birds and small animals protesting the intrusion in their habitat. Lucy lay on the damp moss and rotting leaves, her heart banging against her chest wall. The sound of her pulse racing in her ears muted the sound of the creaks and groans as the tree settled against what was left of her car. Every inch of her body hurt, but her head ached most of all.
__________________________________