Promo + Giveaway: Flame in the Dark by Faith Hunter 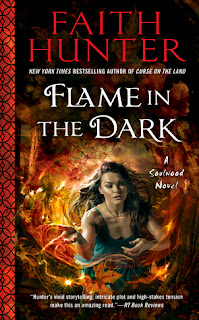 Flame in the Dark
Soulwood #3

“Can you prove he—it— wasn’t human?” Soul asked.
“Empirical evidence in a few days,” I said, speaking in my work accent. “Maybe. But not scientifically.”
Soul heaved a sigh she might really need. I wasn’t sure if her species needed air the same way humans did. Maybe they breathed through their pores or had holes in their rib cages or something. “I’d like you to speak with Ming of Glass and her bodyguard. See what you can get out of them. When you are done, they may leave, with our thanks.”
I stood, flatfooted, meeting Soul’s gorgeous and slightly amused eyes. At her side, Rick looked as surprised as I felt.
“Ummm. Don’t you think there might be someone better than me to talk to a vampire?”
“No,” Soul said. “You are precisely the right person to address the issue of paranormal beings who’ve committed first- degree murder and/or hate crimes with the highest -ranked vampire in Knoxville. And it will be an opportunity to rebuild bridges that you set fire to when you referred to all Mithrans as smelling ‘maggoty,’ I believe?”

New York Times and USAToday bestselling fantasy author Faith Hunter was born in Louisiana and raised all over the south. Altogether she has 40+ books in print under the names Gary Hunter, Gwen Hunter, and Faith Hunter. As Faith, she writes two contemporary Urban Fantasy series: the Jane Yellowrock series, featuring a Cherokee skinwalker who hunts rogue vampires, and the Soulwood series, featuring earth magic user Nell Ingram. Her Rogue Mage novels are a dark, post-apocalyptic, fantasy series featuring Thorn St. Croix, a stone mage. The role playing game based on the series, is ROGUE MAGE, RPG.