Review: Dragon Her Back by Susannah Scott 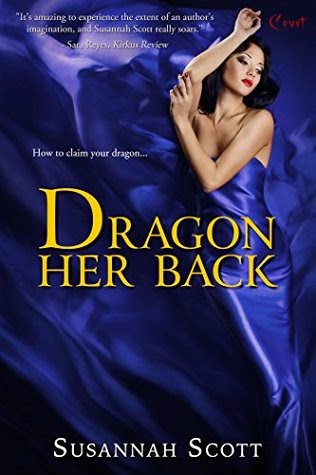 
How To Claim Your Dragon...

As the head of security of Vegas's Crown Jewel casino―and its hidden dragonshifter sanctuary―ice dragon Darius Dachien commands respect. Unfortunately, that respect isn't always reciprocated. In fact, when it comes to the stunning Mei Chen, hostility might be a better word. Which makes things even harder for Darius, since Mei is his dragon mate. Without her, his dragon form is fading fast...and once lost, will be gone forever.
Mei can't deny the fierce chemistry that simmers between them. If Darius were ever to discover who―or rather, what―she really is, she wouldn't just lose him, but her place with the dragonshifters. The moment Mei's past comes crashing into her present, she realizes her time for secrets has ended. Now she must reveal her true self...and risk both her life and her heart with the one man who could destroy her.


We FINALLY get Mei and Darius's story in DRAGON HER BACK. It was nice to finally understand why Mei was pushing Darius away and get to know them both better.

Mei was never my favorite secondary character. She comes off pretty hard and cold and I really didn't like how she was pushing Darius away even though his dragon was fading. I was relieved when I realized that she didn't KNOW that his dragon was fading and she in fact cared a lot about that fact. I am not sure if I just assumed before or if that is a spoiler so I apologize now if no one else knew that either. I didn't really have an opinion of Darius before DRAGON HER BACK. I felt sorry for him for having a mate that didn't seem to want him, but that was about all. I was really surprised at how vulnerable Mei was throughout most of the book. She ended up confiding in Darius pretty quickly and didn't drag it out until it was too late, which was nice. It was great to watch them finally come together as a team (although it wasn't always smooth).

There were a few things I didn't understand and they're bugging the heck out of me. Why did the woman in the casino smell like Darius? Doesn't something like that only happen if they have sex? If so, wtf? Don't get it. Also Lana. She was awful and refused to help Mei when she was was obviously in trouble. Why wasn't this brought up again? Both situations really left a bad taste in my mouth and it would have been nice if we got more answers and closure from them.

One of the things I have enjoyed about all of the books in this series is that they are all shorter, fast paced, and still manage to convey a complete story. Whose love story will be next? Could it be Jane?

* This book was provided free of charge from the author and publisher in exchange for an honest review.
Posted by StacyUFI at 2:30 AM No comments: