Review: Before the Storm by Claire Ashgrove 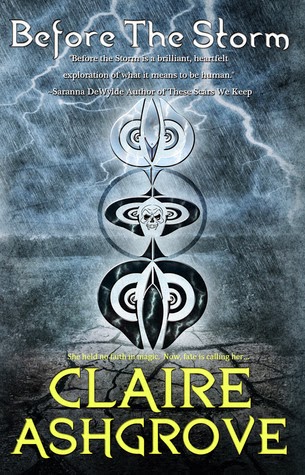 
Halle Rhoads has a terrifying gift--she can kill with the fury of the storm.

She should have known that kind of power wouldn't go unnoticed. Thrust into a world full of dark magic with a handsome stranger who claims he can teach her, she struggles to master her abilities and stumbles onto a dangerous truth. She's a windwalker, the chosen vessel of the ancient dragons who once ruled the world. Many will stop at nothing to possess the power in her blood, should they discover her secret. With necromancers hunting her and Halle's closest allies guarding secrets, mastering her magic becomes a matter of necessity.

But accepting her destiny is altogether different. For doing so means she must sacrifice everything.


BEFORE THE STORM is the first book I have read from author Claire Ashgrove and it was a great introduction to her writing. BEFORE THE STORM starts out with Halle peeking in on the family that thinks shes dead. Just as she is about to jump in and defend the sister that is being physically and emotionally abused by her uncle a strange boy stops her. From that moment on Halle learns that she is not alone in the power she wields and she has to learn how to control it or she will never be able to protect those she cares about.

Halle comes across very hard headed, argumentative and somewhat of a loose cannon. I hate to admit it, but I didn't care for her at first. As I got to know Halle, her past was revealed and her attitude becomes understandable. Dealing with what she had and not knowing the people that she now finds herself in the company of is not easy for her. Especially since no one seems to be able to tell her the truth about anything.

The world is nicely built. I enjoy elemental type powers so I had fun learning about the powers used in BEFORE THE STORM. There was a lot of action, especially from mid book through the end. The characters seems to make their fair share of bad decisions but they all come together to help each other when needed.

The end left me feeling sad and a tad bit annoyed with Halle. Her decision process was sound, and I understand why she came to her decision, but I just felt like Halle was giving up and I don't see her as a quitter. I will have to read book 2 to find out how her decision turns out and to learn more about her story.

I gave it 4/5 stars
* This book was provided free of charge from the author in exchange for an honest review.
Posted by StacyUFI at 3:00 AM No comments:

Before the Storm by Claire Ashgrove