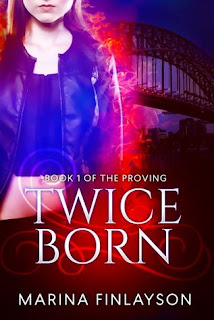 
Still grieving her beloved son, Kate O’Connor’s just going through the motions. She doesn’t care that strangers often shadow her on the unorthodox courier jobs she does for a friend. She doesn’t even care what’s in the packages until the day she returns from a special rush job with no memory of the event. But it must have been pretty wild, because now there’s a werewolf in her kitchen trying to kill her—and he’s just the first in line.

Dragged into a supernatural war of succession between the daughters of the dragon queen, Kate discovers a Sydney she never knew existed, peopled by all kinds of strange half-human creatures. To have any hope of surviving she must uncover the explosive secret hidden in her memory—but first she has to live through the night.


TWICEBORN is one of those books that I am having a really hard time reviewing. The reason being that I didn't dislike the book, but I didn't fall in love with it either. On top of that, there isn't an obvious reason for either, it just was.

TWICEBORN had a lot going for it. Kate was a likable character, the storyline keeps you guessing and the there is action all over the book. So why didn't I love it? I just didn't completely fall into the story and things that I wanted to happen, didn't happen like I thought they would. That's not a bad thing, just made it harder for me to totally fall into some of the major scenes.

There was a little bit of romance in TWICEBORN. It was definitely a sideline sort of thing and wasn't super exciting, but I know some people like a little romance with their urban fantasy so I thought I would mention it.

I got through TWICEBORN no problem and I even enjoyed most of it, but not enough to want to know what will happen next.