UFI welcomes Author Jenn Windrow. Thanks for Joining us!!

Jenn Windrow loves characters that have a pinch of spunk, a dash of attitude, and a large dollop of sex appeal. Top it all off with a huge heaping helping of snark, and you’ve got the ingredients for the kind of fast paced stories she loves to read and write. Home is a suburb of it’s-so-hot-my-shoes-have-melted-to-the-pavement Phoenix. Where she lives with her husband, two daughters, and a slew of animals that seem to keep following her home, at least that’s what she claims. 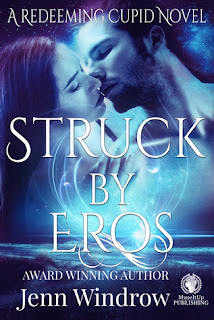 After a lifetime of dating losers, Noel Chase thinks she’s found love with college professor Len Holder. But Cupid's aim sucks worse than his crap-tacular curse, sticking her with supposed soul mate, Grayson Adler. Grayson is gorgeous, Greek, and an exact replica of the man-whores of her past. No matter what the chubby cherub thinks, Noel is sure Grayson is Mr. Wrong with a capital “W.”

Forced to do Cupid’s bidding, Noel must spend her days with Grayson matchmaking the unlucky-in-loves, and trying to resist Grayson’s charm and do-me-now sex appeal. But when Cupid tries to match her fiancé, Len, with another woman, Noel must make an excruciating decision. Defy Cupid and hang on to Len? Or succumb to her fate and trust Grayson with her heart?

Jenn Windrow writes sexy like nobody's business! Struck by Eros is fast, fun, and feisty! I loved every word!