UFI welcomes Angela Dennis Author of Shadows of Fate. Thanks for Joining us!!

I’m so excited to have the opportunity to do a guest post on Urban Fantasy Investigations. Since I love BuzzFeed top ten lists, I thought it would be fun to put together a list for Shadows. Here you go, enjoy!

1. Brenna drinks her coffee out of a mug that reads “Blood Suckers Rock.” It’s hot pink.

2. Brenna and Lucy have a weekly poker game where they use moon pies as money. It’s the only currency Lucy will accept.

3. Lucy prefers chocolate moon pies. She will only eat the vanilla ones if she’s desperate.

4. Although Hilda is a ghost, she has found a way to eat solid food. She loves orange rolls.

6. Before Marissa took on the role of housemother, she was Brenna’s partner at the IRT.

7. Mira was an attorney who worked as a prosecutor for the IRT. She was forced to quit when she was made a vampire because she couldn’t control her blood rage.

8. Several years before the start of Shadows, Brenna saved Sam’s life. To thank her, he cleaned up his act and became a semi law abiding incubus.

9. Gray draws his power from the elements. He is weakest when he is inside a building.

Angela Dennis lives outside Cincinnati, Ohio with her husband, son and a sheltie with a hero complex. When she is not at her computer crafting stories, she can be found feeding her coffee addiction, playing peek-a-boo, or teaching her son about the great adventures found only in books. 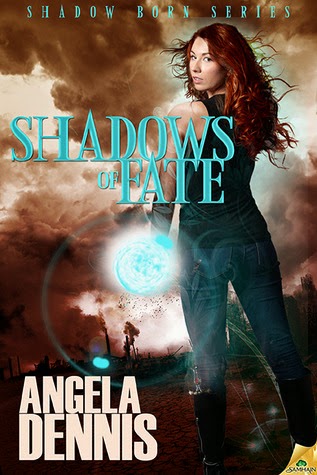 
Redemption lies beyond the veil between truth and lies.

After witnessing her husband’s brutal murder, Brenna Baudouin lost control of her Shadow Bearer powers and wreaked havoc on her home world. Her penance: one hundred years policing hordes of supernatural misfits that spilled onto the Earthly plane after a cataclysmic war.

She’s on a routine exorcism run when she learns she’s been assigned a new partner. But there’s something about this Shadow Bearer that sparks her suspicions. Particularly when people closest to her start turning up as piles of ash.

Gray Warlow holds tight to the glamour that allows him to get close to the woman on whom he plans to wreak vengeance for betraying his people. Yet as he skillfully manipulates his way past her distrust, he begins to see her not as the heartless monster he was led to believe, but a strong, vulnerable woman.

As they work to put together the pieces of a killer’s macabre puzzle, an attraction deeper than blood and bone flares between them. And they must reveal their deepest secrets to avoid becoming the final targets,