UFI welcomes Devyn Quinn Author of Darkness Descending. Thanks for Joining us!! 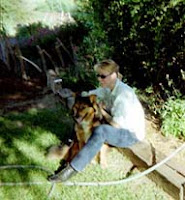 DQ: That I don’t own a television. Really. I haven’t had one in about ten years. Because I have a habit of mindlessly flipping, I found having one a huge time suck. So I got rid of it to focus more on my writing. But that doesn’t mean I go without movies or television shows. I have an iPad and have all the entertainment I need at my fingertips. But it doesn’t come out until later in the evening, when the work day is over.

DQ: I spend a lot of time reading books and magazines, as well as catching up on television shows I like. I’ve just finished the first season of Damages and I am looking forward to the 5th season of Dexter in August.

DQ: I always say I hate two parts of writing a book. Starting one is agony. I simply grit my teeth trying to write chapter 1. Writing the ending is particularly traumatic, too, because I’ve been in the zone and suddenly the book is done. The best part is when you’re in the middle and characters and plotting is coming together so well that it doesn’t even seem like work.

DQ: Yes, I do. I have a set schedule and I do it every day, without fail. I have a certain word count to meet, too. Once that goal is made, I am ready to close the file and go on for time away from the desk.

DQ: Don’t slap me, but I don’t read much fiction at all. I made a conscious decision not to read other books in the same genre simply because I didn’t want to see that another writer was doing what I wanted to do—and probably better than I ever could. Another reason was to keep their ideas from muddying mine. In UF, a lot of the world building around vampires, werewolves, etc… is sometimes bound to overlap in common lore. Keeping my ideas fresh and original is important to me as a writer trying to create yet another twist on the tried and true.

But that’s not to say that I’m not aware of what’s already on the market. Every now and again I will pick up a title that seems a 180 degree turn from what I am doing and take a peek.

How would you pitch Darkness Descending to someone that has not heard of it yet?

DQ: Tagline: “It’s the end of the world…And the vampires are winning…”

Can you tell us a little bit about the world that the Vampire Armageddon series is set in?

DQ: The book is set in New Orleans in the wake of Hurricane Katrina. During the recovery a strange plague has begun to move among the population. Seemingly attacked by rabid animals, people are dying at an alarming rate. Only a few are aware that the infection is the work of a demonic parasite that inhabits and
resurrects corpses.

Do you have a favorite scene in Darkness Descending?

DQ: Yes, absolutely. In fact there’s so many too choose from. But I’d have to say that the most pivotal moment comes when my hero, Maddox deValois, finally has to admit he’s a bite junkie—someone who actually enjoys being taken by the vamps. He’s got the break the addiction or face execution at the hands of his comrades, who view him as a danger to their mission.

DQ: I always love writing the dark and broody hero types. Almost all my books have them in one form or another. Maddox was a definite favorite. The most difficult to write was Reyen Akansea, my Native American slayer. Reyen in not friendly to outsiders and his behavior toward Jesse Burke could be called plain rude. They eventually fall into an uneasy comradeship, but Jesse has to prove that Reyen can trust her.

DQ: I am presently in the process of writing Darkness Awakening, book 2 in the series. The final book in the Dark Tides trilogy, Siren’s Desire, will also be released in February 2012.
__________________________________
Author Bio: Devyn Quinn lives in the scenic Southwest, though she has called several other states home. She is a huge fan of dark gothic music & shoot-’em-up action movies. But reading is her first love and Devyn spends too much time with history books, as well as feeding her addiction for celebrity biographies. She especially enjoys reading books on Hollywood before the 1960′s and is crazy about Marilyn Monroe, her legend and her myth. 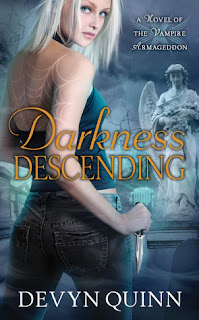 Fallen angels in the form of vampires are infecting humans one by one, creating an army fit for Armageddon. Jesse Burke, driven by vengeance to destroy the vampiric angels, has been protecting New Orleans from the onslaught, unaware that she has a much greater destiny awaiting her in the face of the oncoming apocalypse...

RULES
1)  Leave a comment or question for Devyn =)
2) This giveaway is open to both US and International readers.
3) Must leave an email address so I can contact you.

Giveaway Ends 8/8/2011 at 10pm EST
Winner will have 48 Hours to reply to my email or I will pick another
Winner chosen randomly with the help of random.org
Posted by StacyUFI at 3:00 AM 42 comments: