Nancy Gideon is the award-winning bestseller of over 65 romances ranging from historical, regency and series contemporary suspense to dark paranormal and horror, with a couple of produced screenplays and non-fiction writing books tossed into the mix.

A legal assistant for a brilliant criminal attorney in Central Michigan (when not at the keyboard working on her latest book in progress), she feeds a Netflix addiction along with all things fur, fin and fowl and dotes on her grandguy. 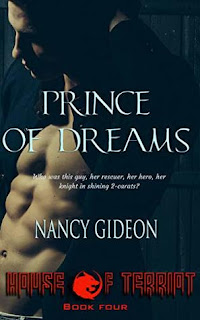 Kip . . . Prince in the shapeshifter House of Terriot

He'd said he wasn't a mobster. . . She should have asked if he was a monster.

Who was this too good to be true, always ready in a crisis guy working a menial job for her father? Ophelia knew things. Something was not quite normal about the Kip Terriot hiding behind another name in lace-up dress shoes and a preppy wardrobe – something wild and exciting as all hell. A dangerous something calling to that restless difference in her own soul.

Ophelia . . . daughter of his enemy, girl of his dreams

So sassy, so sweet so perfect . . . and what he had to do would destroy her.

Kip was in New Orleans to save his clan and his kind, not to play white knight for Ophelia Brady with her quirky habits, curvy body and tormented past. His deception would rip the heart from her world, not help heal it. Was his family’s nemesis using his own daughter to make Kip the played instead of the player, pulling him between love and duty to make an impossible choice?

An unnatural being from a family of shapeshifters.
Even now Ophelia didn’t know whether to laugh or weep at the absurdity of it. Things like that didn’t exist. Except she knew they did, just outside the peripheral, where worlds of fact and fiction met and mingled and blurred. She’d felt their presence in the shadows of reality all her life. She met them in her dreams and visions.
Kip Terriot gave them gorgeous face and form, but underneath, he was that creature with red eyes and sharp teeth. Her big, bad wolf, who’d protected her from a robber and defended her from abuse, who’d rescued her sister from the attack she still refused to acknowledge. Who loved his family and would do anything for them?
Who she loved too much to let go but couldn’t give what he needed because she wasn’t his kind.
Which was the greater fear, what he was or that she’d fail him?
“What are we going to do, Phe? I don’t want to lose this.” He brought her knuckles to his lips for a kiss.
“I don’t want to lose you. But I already have, haven’t I? You’re a million miles away right now and almost out of reach.”
“I’m right here.” His argument brought her to him, her knees stepping over his lap to straddle him, arms circling his shoulders, face nestling against the curve of his throat where she rode his hard swallow. He held tight, trying to believe they could make this moment last, this glorious, fiery, tender moment that offered so much and promised so little.
“You are my prince,” she whispered, breath moist and soft against his neck. “My Prince of Cups. You rode into my life bringing romance, shaking my world to its foundation that first night I met you. It was in the cards.”
“Fate,” he murmured, smile in his voice. “No escaping it.” His fingers threaded through her hair, pulling back gently to tip up her face, offering sweetly parted lips and glistening eyes.
He’d planned a sweet kiss but the taste of urgency and need in the sweep of her tongue ruined that noble ambition. They feasted upon one another for long, desperate minutes until she rocked back, thumb swiping the dampness from his mouth.
“Go, be who you need to be for them. Then come back and be who I need you to be.