Thank you to everyone that entered!!
PRIZE: Winner One will recieve Hounded, Hexed and Hammered by Kevin Hearne
Winner Two gets choice of book from selection in original post

Congrats!! I have emailed winners who has 48 hours to respond with mailing address' or I will pick another.
Posted by StacyUFI at 10:09 PM 1 comment: 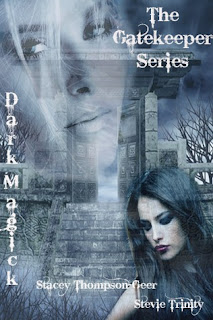 
The world has changed, we have changed. The world we once knew has fallen away and left us in a wasteland of Magick. Powerful witches and underworld gods control our lives. The past comes back in ways we are not prepared for. The Gatekeepers are our only hope. The question is if we can get to them first.

DARK MAGICK takes place in a post apocalyptic US. Witches are recruited by the government and if you refuse to be with them you are against them. The story is in two different point of views. Lynn and Rhea are both powerful witches and best friends. They are hiding out with a group of other people and are fighting to close the gates to the underworld. The story as a whole was pretty fast paced and had some great scenes. I thought the plot was interesting and original but tended to get confused when the Point of views shifted. I confused the characters often and had to re read passages to make sure my head was in the right frame of mind for which character was talking and where they were in the story. I felt the editing could have been better to fix this. The characters were pretty well written and developed. I enjoyed the little romances that sprung up and the situations that the characters seemed to get themselves in. I think the story has a lot of potential in future editions with all the great powers that are shown in the characters and battles that are ahead for Rhea and Lynn and it will be interesting to see these authors grow in there writing.

Tue July 12
Dragon's Oath by P.C. Cast and Kristin Cast
Forever (The Wolves of Mercy Falls, #3) by Maggie Stiefvater
Undercurrent (Siren Trilogy, #2) by Tricia Rayburn
Texas Gothic by Rosemary Clement-Moore
Wildcat Fireflies (Fenestra, #2) by Amber Kizer
Let me know if you see a mistake or find that something is missing. Happy reading =)
Posted by StacyUFI at 3:00 AM No comments: