Interview: Once in a Blue Moon by Vicki Crum

UFI welcomes Author Vicki Crum. Thanks for Joining us!!

We have a house on the Arizona end of the Colorado River, and love spending time there. I used to be quite the water-skier until I had problems with my knee. But we take the family up the river in the boat and float to our heart’s content, jumping in and out of the water and having lots of fun. Then one of our grown kids will wakeboard home!

I’m a world-class shopper, I love to shop! I enjoy home decorating, finding fun odds and ends to make my home feel more cozy and look nice. Usually beachy stuff since we live at the beach. Of course, I love to read and I’m often reading 2 or 3 books at a time. My favorite thing to do, though, is spend time with family—my husband, daughters and two adorable grandchildren. I can play make believe with the kids for hours on end!

I love where the writing process can take me. I’m a panster, and I really can’t plot very far ahead. I have to start writing and just let it flow. It always amazes me to see that the characters I create have minds of their own. They tell me so much about themselves as I go along, teaching me things that I didn’t know before---about the story and about themselves. It’s weird, but it happens with every story I write. The subconscious mind works in amazing ways!

I can’t write if I have a bunch of stuff hanging over my head. Some people are able to write with the world falling down around them. I’m not one of those people. If laundry needs to go in, it goes in first. If I have errands that can’t be put off, I get them done early. I can’t work in a lot of clutter---mental or physical. If I try, I’m just not productive.

I like Amanda Ashley, Susan Squires and JR Ward.

How would you pitch Once in a Blue Moon to someone who has not heard of it before?

It’s a light-hearted, sexy romp about a woman addicted to bad boys who’s about to have her world rocked by the ultimate bad boy—a leather-wearing, Harley-riding hottie who just happens to be a werewolf. And Jake knows a secret about Casey that’s not only going to knock her socks off, it will change her life forever.

Can you tell us a little bit about the world that Once in a Blue Moon is set in?

It’s actually set in the small beach town where I live, an area that can present a problem for a werewolf looking for a place to run wild and free in his natural state. But that’s only one of Jake’s problems at the moment. It’s up to him to introduce Casey to her true heritage, teach her to turn and to embrace her new reality as a werewolf. He hadn’t planned to do it in is condo in downtown Sacramento, but fate had other ideas!

Do you have a favorite scene in Once in a Blue Moon?

One of my favorite scenes is when Casey’s older brother, Reed, discovers her and Jake locked in a torrid embrace. He had no idea that Jake, his old friend and college roommate, was sleeping with his little sister---practically right under his nose! The dynamic of the situation puts all three of them at odds. It was fun to plumb the depth of the emotion involved, yet play it up with humor at the same time.

I love the hero in my last book, Loving Luc. Luc was fun to write because, to me, he’s the ultimate hero. Mysterious, protective and loving, strong and powerful, yet kind and compassionate. And did I mention gorgeous?

The hardest? Hmmm…I have a hard time writing villains. Even when I need them to be horrible, despicable creatures, I’ll end up giving them a redeeming quality or two. I’m just not that good at creating evil!

I’m working on Reed’s story now (Casey’s brother in Once in a Blue Moon), giving him his own “happily ever after”. And I have a short story/novella in the early stages that I hope will fit into a Fall schedule somewhere, about a hot vampire hunk who owns and operates the local bookstore. And I have a rock star manuscript that’s getting a plot retool, but that’s my backburner project at the moment.

Vicki Crum writes both contemporary and paranormal romance. She lives with her husband of 40 years in a small, enchanted seaside community in Southern California. She has two grown daughters and two adorable grandchildren, Bella and Jackson, whom she loves to distraction. Vicki loves to talk to her readers. 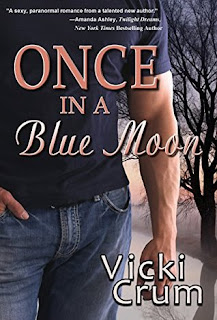 Once in a Blue Moon
BN  & Amazon


Casey Montgomery's lifelong addiction to bad boys has brought her nothing but heartache. Just as she swears off alpha males forever, a brief, torrid encounter with one of the hottest, Harley-riding, leather-jacketed hunks she's ever seen leaves her reeling – and worse, jeopardizes her carefully laid plans to meet and fall in love with a nice, dependable nerd.

Jake Benedict has been around the block enough times to recognize his mate when he meets her, a gorgeous werewolf with a case of latent genes who doesn't have a clue about her true identity. Jake is just the were to teach Casey about her ancient heritage and coax her feral side into revealing itself.

While Casey can't resist the intense physical attraction she feels for Jake, she's determined to freeze him out emotionally. Can Jake break through Casey's defenses and prove to her once and for all that he's one bad boy who's playing for keeps?