UFI welcomes Deborah Coates Author of Wide Open. Thanks for Joining us!!
What can you tell my readers about yourself that they might not know from looking on your bio or reading in another interview?

I will go tracking with my dogs in almost any weather (Maybe not a hurricane. Or a tornado). Ten degrees? Yup. Pouring rain? Sure! There's nothing better than to spend the day outdoors with dogs and tracking buddies. Sometimes it's cold. Sometimes it rains. But laying tracks, running them, trying to figure out what the dog thinks and what it's trying to say, even sitting down somewhere to drink coffee while our tracks age--it's mentally and physically engaging and I would brave snow and sleet and even rain to go outside and do it.

Reading, writing, doing stuff with dogs. This year I discovered audiobooks and it's been delightful because the books and the narrators are great and also because I can listen to them while I'm walking dogs. What could be better than combining reading with exercise and time with dogs. If I could figure out how to work writing in it would be perfect!

I think my very favorite part is when I type those first few paragraphs of a new story or novel. At that point it feels like it's all clear in my head, like it will translate perfectly to the page, and like nothing can possibly go wrong.

I've become, from necessity, very much a 'sit down and write' sort of person. I have a full-time job, I teach obedience classes in the evenings, I train my own dogs (theoretically) and I try to write every day so there isn't a lot of space in there for much extra. That said, I am a master of writing avoidance--cruising the internet, playing word games, reading just one more blog post. Sometimes, when I'm working on a particularly difficult scene, I tell myself--just write 200 words and you can [read that blog post] [play another round of that game] [spend ten minutes picking out new sheets that you don't need and are not actually going to buy]. Bribery works.

I'm particularly fond of Urban Fantasy with a strong mystery element. My most recent reads include works by Patricia Briggs and Carrie Vaughn. I have to admit, though, that it's hard for me to read in the same genre I write in. I tend to read tangential things, like mysteries. Lately, I've been particularly enjoying mysteries by Louise Penny and Deborah Crombie, which do some of the things I really like about urban fantasy and paranormal but without, well, the fantasy elements. They have interesting characters in a fascinating setting and, importantly to me, the characters have lives outside the particular mystery they're trying to solve.

How would you pitch Wide Open to someone who has not heard of it before?

Wide Open is the story of a soldier who sees ghosts and who has returned to western South Dakota to find out what happened to her sister. She discovers that lots of things have changed while she's been gone, that there are more ghosts vying for her attention than just her sister's and that the new deputy sheriff may just know more than he's telling.

Can you tell us a little bit about the world that Wide Open is set in?

Wide Open is set in western South Dakota in Taylor County, a place I invented for the story. I think of it like the safe house in Harry Potter. It doesn't displace any of the counties that are already there, it just slides itself in between them. It's a place of wide open spaces and short grass prairie and long distances between houses and towns and people. It's a place that I think a lot of people aren't familiar with and I approach it like it's a new world that readers are seeing for the first time.

Do you have a favorite scene in Wide Open?

I have a few favorite scenes, but I'll tell you about two of them without, I hope, being too spoilery. There's a scene fairly close to the beginning of the novel when Hallie's sitting in her pickup truck in the very early hours of the morning and she decides to finally make a phone call she's been avoiding. It's a call the chaplain asked her to make before she left Afghanistan to the fiancée of a fellow soldier who died with her when they were on patrol.

The other scene is much later in the novel. Hallie and Boyd are in the parking lot of an abandoned church out on the prairie. Hallie is sitting on the tailgate of her pickup. Boyd is facing her. They have a six-pack of beer, the stars are starting to come out overhead and they're just...talking.

Hallie is probably my favorite in the sense that her default is always to DO SOMETHING. She's not much for thinking about what she's going to do and she's perfectly willing to accept the consequences of her actions. If I'm writing a scene with Hallie and I get stuck, I will eventually realize--oh, right, Hallie would DO SOMETHING.

I don't know that he was the hardest to write about, but Hallie's father was one of the hardest for me to write so readers would 'get' him. He was always very clear in my head, but he's taciturn and doesn't like people all that much and he can be kind of cranky. But he's not mean and he loves his daughters and he's basically an okay guy. As long as you don't get too mushy or anything.

I've written a second book about Hallie and Boyd and South Dakota, which is currently with my editor. I won't say too much about it since it hinges on what happens at the end of Wide Open, but it involves Boyd's past and Hallie's future and a dog that isn't exactly a dog. It's current title is Deep Down, though that's always subject to change.
__________________________________
I’m a published writer of science fiction and fantasy short stories.  My first novel, Wide Open, will be published by Tor in March, 2012.

I currently live in central Iowa and work at Iowa State University.  I grew up on a sometime dairy farm in western New York.  I went to a couple of different universities and got a couple of different degrees.  I’ve lived in Indiana, Pennsylvania, New Hampshire, and Iowa.  I’ve been a farmhand, a factory worker, a statistician, a researcher, an educator and an IT professional. 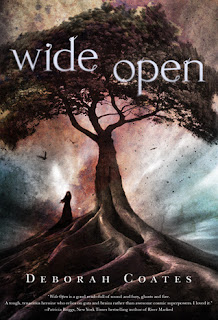 
When Sergeant Hallie Michaels comes back to South Dakota from Afghanistan on ten days' compassionate leave, her sister Dell's ghost is waiting at the airport to greet her.

The sheriff says that Dell's death was suicide, but Hallie doesn't believe it. Something happened or Dell's ghost wouldn't still be hanging around. Friends and family, mourning Dell's loss, think Hallie's letting her grief interfere with her judgment.

The one person who seems willing to listen is the deputy sheriff, Boyd Davies, who shows up everywhere and helps when he doesn't have to.

As Hallie asks more questions, she attracts new ghosts, women who disappeared without a trace.  Soon, someone's trying to beat her up, burn down her father's ranch, and stop her investigation.

Hallie's going to need Boyd, her friends, and all the ghosts she can find to defeat an enemy who has an unimaginable ancient power at his command.