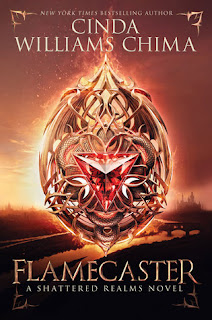 Adrian sul’Han, known as Ash, is a trained healer with a powerful gift of magic—and a thirst for revenge. Ash is forced into hiding after a series of murders throws the queendom into chaos. Now Ash is closer than he’s ever been to killing the man responsible, the cruel king of Arden. As a healer, can Ash use his powers not to save a life but to take it?

Abandoned at birth, Jenna Bandelow was told that the mysterious magemark on the back of her neck would make her a target. But when the King’s Guard launches a relentless search for a girl with a mark like hers, Jenna assumes that it has more to do with her role as a saboteur than any birth-based curse. Though Jenna doesn’t know why she’s being hunted, she knows that she can’t get caught.

Eventually, Ash’s and Jenna’s paths will collide in Arden. Thrown together by chance and joined by their hatred of the king, they will come to rescue each other in ways they cannot yet imagine.

Set in the world of the acclaimed Seven Realms series a generation later, this is a thrilling story of dark magic, chilling threats, and two unforgettable characters walking a knife-sharp line between life and death.


I really wanted to love FLAMECASTER, but really only liked it.

What I liked about FLAMECASTER: I enjoyed the fantasy of the story. There were dragons, wizards, healers, a dragon hybrid?—I think we will find out more about that in a later book. I liked most of the characters. They still had some mystery to them to be solved in a future book, but they had some good development in FLAMECASTER and I enjoyed following them. I enjoyed the world. I had no problem picturing the places visited thanks to the world building.

What I didn't like about FLAMECASTER: There were too many POVs. I would connect with one mind and then be thrust into another right when things were getting interesting. Too many changes. The story got a bit boring and slow in many spots and I found myself skimming to get to the good stuff. I think some of the skimming and boring parts came from not loving all the characters whose POVs were included. There is some MAJOR insta-love going on. If that wasn't bad enough there is some weird mystical like connection between them that really wasn't explained that well.

So the big question is, will I read the next book? I honestly don't know. I don't think I will search it out, but if it happens to fall into my lap for review I think I might give it a try.