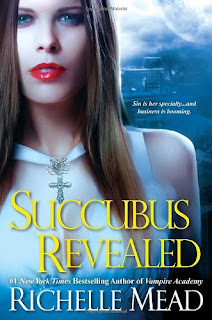 
In Georgina Kincaid, succubus and she-demon, #1 New York Times bestselling author Richelle Mead has created one of her most enticing characters. But with a shot at love, and maybe even redemption, is the ultimate seductress finally going soft? Like hell she is. . .
Georgina Kincaid has had an eternity to figure out the opposite sex, but sometimes they still surprise her. Take Seth Mortensen. The man has risked his soul to become Georgina's boyfriend. Still, with Lucifer for a boss, Georgina can't just hang up her killer heels and settle down to domestic bliss. In fact, she's being forced to transfer operations. . .to Las Vegas.
The City of Sin is a dream gig for a succubus, but Georgina's allies are suspicious. Why are the powers-that-be so eager to get her away from Seattle—and from Seth? Georgina is one of Hell's most valuable assets, but if there's any way out of the succubus business she plans to take it—no matter how much roadkill she leaves behind. She just hopes the casualties won't include the one man she's risking everything for. . .

Georgina is ready to live a normal life with her boyfriend Seth. Only problem is that her soul belongs to hell and there is no way to get it back....or is there? Just when things are settling down again in Georgina's life she receives notice that she is being transferred to Las Vegas. The higher ups are pushing everything through really fast and nothing really makes sense so Georgina with the help of some of her friends go into double time to try and figure out what is happening and why. Little did she know that the answers to her questions would change her world.

I suspected what had happened from a few books in to the series but that in no way depleted my enjoyment of every book in this series. I have loved all of the characters and all of the plots. I have enjoyed watching Georgina fight for what she wants. There were plenty of ups and downs, emotion, suspense, and mystery. Their isn't much more that I can say without giving away some of the major spoilers but I have really enjoyed this series and am sad to see it end, but it ended in a way that was realistic to the situations and closure was provided. I have never gone wrong with picking up a book written by Richelle Mead.

Thank you to everyone that entered!!
PRIZE: Copy of Spider's Revenge