The Winner chosen by Rafflecopter is.....
a Rafflecopter giveaway
Congrats!! I have emailed winner who has 48 hours to respond with mailing address or I will pick another.
Posted by StacyUFI at 7:58 PM 1 comment:

Review: Requiem For the Dead by Kelly Meding 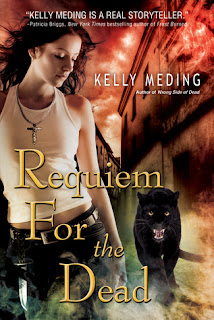 She's died twice while protecting her city…and she'd do it again to save the people she loves.

After a deadly, artificial infection forces the vampire Families into a self-imposed isolation, the city's protective Watchtower forces are depleted by one third, leaving humans and shifters to shoulder the burden. Human enforcer Evangeline Stone is determined to find a way to help her vampire allies, but she already has her hands full—investigating an escalating series of goblin attacks, dealing with her half-werewolf lover, locating three missing werewolf teenagers, and learning to trust her non-human coworkers.

When a potential cure for the vampires' infection is given to her by an unlikely source, it's just as quickly stolen—collateral damage in a power play within the were-cat Clan that leaves one human ally dead and another horribly injured. With Wyatt Truman still adjusting to his new life as a half-werewolf, Phineas missing in action, and her shifter allies crippled by internal anarchy, Evy has to rely on her own strength and instincts to steal back the cure, stop a murderer, and to save the Watchtower before it's destroyed from the inside out.


This is one of those series that you can not help but want to read more of after you have started it. Make sure to start from book 1. There is way to much back story that you would miss starting anywhere else. Some of the books have been better than others but put them all together and they all make for a great read. REQUIEM FOR THE DEAD will be the first in the series to be self-published by Kelly Meding.

It is hard to imagine the Evy that woke from the dead in book 1. She has changed and grown so much since then. The events that have made her who she is are pretty gruesome and so unfair but she is still fighting strong for herself and those she cares about. Wyatt and Evy continue to grow in their ever-changing relationship. They always seem to have something on one of their ends that makes them pause but they managed to push through everything and arrive at the same place during book 5. This series always brings death, I was saddened by those we lost. Some members were hit harder than others with lost loved ones but everyone grieved just the same. Phineas is still gone searching for others of his kind. I miss him, he is needed and I hope he comes back soon.
I have lots of questions that I need answered after reading REQUIEM FOR THE DEAD. I am glad that Kelly has decided to keep the series going by self-publishing and I look forwards to reading what comes next because this series is far from done in my mind.