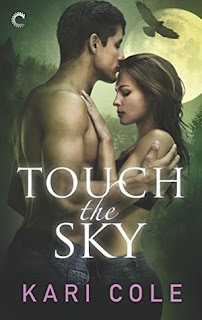 Keep to yourself. Focus on the job.

Sheriff Vaughn Ellis’s very existence as a rare double-shifter defies the natural order. It also makes it extremely difficult for him to get close to anyone. To trust anyone. It’s nothing Vaughn can’t handle, until a seductively sweet woman arrives in Black Robe, and suddenly he can’t think about anything but her.

The product of a witch/werewolf pairing, Hannah Cochran gets the odd-wolf-out thing. But when she uncovers a major threat to the lycanthrope world, she finds herself playing nice with the sexy sheriff. Abiding by the law isn’t usually Hannah’s style, but nothing catches her breath quite like the commanding attraction she feels toward Vaughn.

Working closely together only intensifies their fated connection, making it impossible to deny—or resist. Hannah fears that getting involved puts Vaughn in danger. But when she becomes the target, it’s Vaughn who’ll have to decide which rules he’s willing to break to save the woman he can’t live without.

One-click with confidence. This title is part of the Carina Press Romance Promise : all the romance you’re looking for with an HEA/HFN. It’s a promise!


TOUCH THE SKY is book two in the Mated by Fate series by Kari Cole.

I enjoyed Vaughn's character in book one, so was excited to see him start his journey to his HEA. Hannah was new to me, but I was intrigued with her character from the opening of TOUCH THE SKY and enjoyed learning about her story.

There was a lot of action in TOUCH THE SKY and the danger the characters were put in made for some thrilling scenes. There was a nice pace to the story and the mystery was easy to follow.

I wasn't feeling the romance. I wish the main characters would have spent more time together in TOUCH THE SKY. They knew nothing about each other and there wasn't a whole lot of time to learn about the other. It made it hard to feel their connection. With the previous two characters, they spent more time together than apart and I felt like their connection grew with their learning about each other. I just didn't feel it in TOUCH THE SKY.

There are still plenty of characters I would like to get to know in this series.