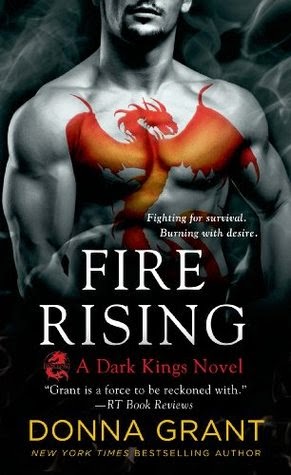 
Tristan, the newest Dragon King, is having a tough time fitting in. Despite his ability to transform into a proud, strong dragon at will, no one knows where he came from or how he became a Dragon King, including himself. When trouble arises in the form of the mob, Tristan is going to have to put aside his questions and band with the other Dragon Kings to protect Dreagan. As if things weren’t complicated enough, he is about to find something worth fighting for more important than the Dragon Kings…

Sammie Miller, pub owner in Oban, has been scorned by her business partner—and former lover. Used as a front for money laundering with the mob, Sammie is in great danger once she realizes what has happened. Barely escaping, she plans to rest at Dreagan for only a day before going back on the run. When Tristan swears to protect her, Sammie thinks his efforts will be in vain—the mob is too powerful, and it will take more than the average man’s devotion to keep her safe. But the closer she gets to Tristan, and the more he learns his secrets, Sammie can’t deny that having a Dragon King who worships you, body and soul, isn’t such a bad thing…

Pub owner Sammie Miller finds herself running for her life when her business partner steals money from the mob and comes after them. Her partner never made it out of the bar before it was blown up. After some time on the run and nowhere else to go she finds herself visiting her sister Jane for some much needed rest. To try to keep Jane safe she keeps her troubles to herself and vows to get away from Dreagan as soon as she can. Tristan still can't remember his life as Duncan. He fits into his new life as a Dragon King and really doesn't want to remember his supposed past. As soon as he lays eyes on Sammie he is immediately protective of her and shortly after that he starts having flashes of his past life as Duncan. With all the emotions running through him all he wants to do is keep Sammie safe but she doesn't make it easy.

I have to admit that Sammie and Tristan were not my favorite couple so far but they still fit together nicely, their story was still fantastic and I like how they tie the Dragon Kings together with the Dark Warriors. It's nice to see most of the crew together in FIRE RISING. I could not imagine being in Tristan's position and I really felt like he handled everything as best he could. I am glad that he has a better understanding of who he is but the end and that he has Sammie by his side as he worked everything out.

On the romance side of things FIRE RISING was still hot hot hot. There is a normal amount of fighting feelings at times on both sides but both Sammie and Tristan know that they are falling fast for each other and sparks fly from pretty much the beginning.

I really like how the series is a continuous story conflict with their own plot lines drawn in. I have found that each story in the series is full of action and danger. I really love all the dragons and look forward to watching them each find their match as the series continues.