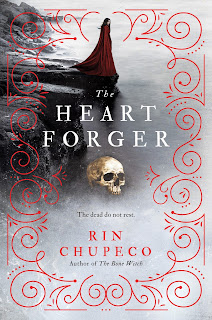 
In The Bone Witch, Tea mastered resurrection―now she's after revenge...

No one knows death like Tea. A bone witch who can resurrect the dead, she has the power to take life...and return it. And she is done with her self-imposed exile. Her heart is set on vengeance, and she now possesses all she needs to command the mighty daeva. With the help of these terrifying beasts, she can finally enact revenge against the royals who wronged her―and took the life of her one true love.

But there are those who plot against her, those who would use Tea's dark power for their own nefarious ends. Because you can't kill someone who can never die...

War is brewing among the kingdoms, and when dark magic is at play, no one is safe.

Despite uncanny resemblances to Japanese revenants, Rin Chupeco has always maintained her sense of humor. Raised in Manila, Philippines, she keeps four pets: a dog, two birds, and a husband. She's been a technical writer and travel blogger, but now makes things up for a living.