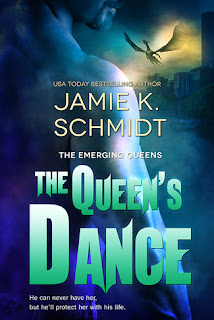 
Despite his handicaps outside his natural habitat, water dragon Remy “Champ” Champlain fights to protect Queen Margery from those who plot to quash her damaging news reports by silencing her...forever.


THE QUEEN'S DANCE was a nice continuation of The Emerging Queens series.

We met both Remy and Margery in book two, THE QUEEN'S FLIGHT and get to dive into their story and romance with THE QUEEN'S DANCE. I enjoyed both of the characters and thought the story was smooth, well developed and held my attention until the end. Margery has a bit of a stubborn streak and it causes quite a bit of trouble between her and the dragon fellas.

Margery and Remy's romance is pretty decent. The dance around each other and their progression as a couple was pretty on par with the previous two installments of this series. There was a nice amount of action in THE QUEEN'S DANCE, but the other two books had a lot of action too.

So, I enjoyed THE QUEEN'S DANCE and had no big issues with it, but I wanted MORE from it. Some big BANG that would separate this book from the rest of the series. Maybe book four will bring me the bang I'm looking for.