Guest Blog: Let Me In by Christine Sutton

UFI welcomes Author Christine Sutton. Thanks for Joining us!!

My name is Kayla Burkheart, and I have a very interesting life. I didn’t used to. I was your garden variety run of the mill alcoholic pill popper. I had no real direction in my life at all. I just wandered between crappy jobs and even crappier friends, looking for any way to dull the pain that I felt inside.

My world changed when I was in my twenties. I was at a bar with some friends that were not very good friends at all. We were celebrating something meaningless, any excuse to go out and get wasted, and I walked out to the alley to have a smoke.

Standing there in the dirty alley behind Smitty’s bar in Olympia, Washington, I had a sort of epiphany.

I had the sneaking suspicion that someone was watching me. When I turned to look down the alley, I saw what it was. A large grey wolf stood no more than fifty yards from me, but he made no move toward me. He just stared, cocking his head as if he was really interested in what I was doing.

What I was doing was resisting the urge to wet myself and run away screaming. Luckily, I managed on both counts. I stood perfectly still, watching the huge animal, ready to bolt at the slightest movement. He took a step toward me and I took a step back. A low, inquisitive mewl came from him and I thought I would die of fright.

After a minute or two of this standoff, my cigarette had burned down and was about to set my fingers on fire. I dropped the butt when the cherry burned my fingers. Immediately, I looked back up, expecting the wolf to be in mid run to eat my face off.

Instead of the wolf, a man stood in his place. He was casually slipping on a pair of jeans and a tee shirt. Within what seemed like no more than five seconds, he was standing next to me sniffing the air around my head. I was still like a statue waiting for him to try something even weirder than what he was already doing.

He smiled a large toothy grin at me and spoke.

“You had better get a move on girl. You need to change your life and you need to do it now. You got powerful enemies, and they are more than happy to see you piss drunk and helpless. You need to show them that that ain’t what you’re all about. You have power of your own and you need to let it out. Otherwise you’ll never be nothin’ but a drunk that could have been something special.”

“Who in the hell are you?” I asked him, scared out of my mind.

“I’m just a lone wolf that ain’t nothing like the rest of the pack. I’m a friend to you because we have a common enemy. I was like you once, and I let my vice overtake me. All that got me was cursed. Trust me, you don’t want that. Get right with yourself, Kayla.”

With that, he held out his hand, offering something to me. Against my better judgment I reached out and took it from his palm. I looked down and saw one small bean. When I looked up again, he was gone.

I stood there trying to catch my breath and deciding if any of what I saw had actually happened. When I got back inside the bar, hearing the hoots and hollers of my drunken friends, I just felt alone.

I looked at the bean in my hand and walked out of the bar. When I got home, I emptied my pockets, placing the bean on my nightstand. I went to sleep, wanting the day to just end.

When I woke up the next morning, I didn’t have the foggy hangover that I had grown so accustomed to. I felt good. As I rolled over to get out of bed, I saw that the bean had sprouted two small green leaves.

I made the call to the rehab center that morning, enrolling myself in the eight week program. I got myself sober, met David and fell in love. After I got out and moved back into my mother’s house, I took the now large plant that had sprouted from the single bean with me, setting it up on the kitchen table.

It was dead within a day. I should have known something wasn’t right.

Thus began my fairy tale life. Not the kind of fairy tales you are thinking of. Sometimes I get a happily ever after, well actually more like a happily for now. Something else always comes up. If it isn’t my psychotic family trying to kill me, it is some other fairy tale creature that wants to steal my powers.

I forgot to mention that. I’m a witch. A pretty powerful one at that. My mother and father were witches, my aunts and uncles were witches, and my kids will all be witches, etc. Quite a bit of information to find out about yourself, all the while battling werewolves, vampires, and every other evil monster you can think of.

So far though, I’m doing okay. I’m getting a handle on these powers, and I have a new family that loves me and I love them. So, I think overall I’m gonna be all right.

Christine Sutton is the author of more than fifteen short stories, novellas and novels. While she tends to cross genres within horror, she is always passionate about scaring the hell out of you.

Her passion would have to be serial killer fiction, but she also loves ghosts, ghouls, demons and monsters of all types. Christine's work ranges from modern day fairy tales to demonic soul eaters to ghostly children that just want to play. Her writing has been called passionate, realistic, gritty, fun, enthralling and tons of other cool adjectives.

You, too can pick up some of Christine's work and come up with some cool adjectives of your own. It won't be hard. I promise. 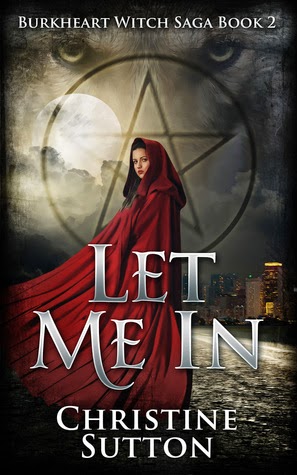 
Kayla has returned home to find that the fairy tale continues. She finds out some facts about her family history that may be her ultimate undoing.

With the help of a coven of witches, Kayla is tasked with defeating vampires, werewolves and evil witches that threaten to destroy her happiness and her very life!

Will she get her happily ever after, or will she fall victim to the evil that courses through her veins?

This novella will take you through a whirlwind as you join Kayla on another fairy tale adventure. Previously published as Kayla Enchanted.

He laughed, watching the little pigs scramble to clean up the message he had left. He didn't really believe in playing with his food, but this was so much fun!

He could tell that the bitch was terrified, and he loved it. Pigs tasted so much better when they were afraid.

While the bitch pig, the pussy pig, and the little pig in a blanket slept in their bed, he had ripped that rabbit's head off with his bare hands. As he smeared the blood all over the sidewalk to leave them a message, he hadn't been able to stop himself from taking a long drink from its mutilated little body. It tasted so good that he had almost marched into the house and ate all three of them right then.

Self-control had won out. He had simply left the message, knocked over the sad little straw hut and sat in the bushes to watch them scamper around. They had rushed in when they found the message and locked up the house as if that would do any damn good at all.

He had to admit that he had not liked the look on the woman's face. As she had walked into the house, there was a look that appeared to be defiance as she scanned the yard for danger.

He would rip that smug look off along with her lips, nose and eyes. He hadn't realized that the whole time watching them, he had been digging his now extended claws into his own thigh. The blood had partially soaked through his denim jeans and began to drip onto the well-manicured grass. He released the grip on his leg and wiped his hands on the dry part of his jeans.

He knew it would heal completely before nightfall. The mixture that his blood contained was great for self-healing, and even better for speed and strength. There would be no stopping him this time. Even that little witch's magic wouldn't do the trick. He had a few 'tricks' of his own to show her. Wouldn't that little pig be surprised?
__________________________________

Our perceptions create our reality, even when they're wrong. Nobody understands this better than Gavin. Nobody. To most, he is a shadowy agent of chaos. His motives are questionable, his methods bizarre. But his journey is one of both protection and redemption, and his story is yet untold. Until now. The past and present you think you know are about to change. And you’ll never see Ruby, Gavin, or their relationship the same way again.

BOOKS IN THE CAGED SERIES: Click the image to be taken to the book's Goodreads page.

PREVIOUS BOOKS IN THE UNBORN SERIES: The Unborn series is a Caged spin-off series published with 47North.


Click the image to be taken to the book's Goodreads page.

ABOUT THE AUTHOR Amber Lynn Natusch is the author of the bestselling Caged, as well as the Light and Shadow series with Shannon Morton. She was born and raised in Winnipeg, and speaks sarcasm fluently because of her Canadian roots. She loves to dance and sing in her kitchen—much to the detriment of those near her—but spends most of her time running a practice with her husband, raising two small children, and attempting to write when she can lock herself in the bathroom for ten minutes of peace and quiet. She has many hidden talents, most of which should not be mentioned but include putting her foot in her mouth, acting inappropriately when nervous, swearing like a sailor when provoked, and not listening when she should. She’s obsessed with home renovation shows, should never be caffeinated, and loves snow. Amber has a deep seeded fear of clowns and deep water…especially clowns swimming in deep water. To learn more about Amber and her books, visit www.amberlynnnatusch.com.

Happy Reading!
Posted by StacyUFI at 1:30 AM 3 comments: