Review: What a Werewolf Wants by Kristin Miller 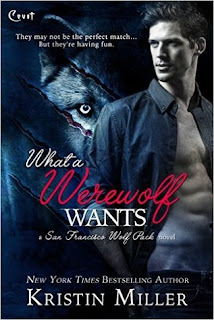 They may not be the perfect match…But they’re having fun.

Going to the chapel, and her sister is going to get married…no matter what.

Josie Cole might be unlucky in love, but she’s a pro at matching other couples. When her sister gets married to the man of her dreams, it’ll be Cole Matchmaking Services one-hundredth match, and secure Josie a television special that would boost business.

Private investigator–and werewolf–Ryder McManus doesn’t believe in marriage. Catching cheating spouses has taught him there is no such thing as happily ever after. But then he never expected to find his fated mate, Josie, at his best friend’s wedding festivities.

When Josie and Ryder are together, the chemistry heats up. While he’s trying to stop the wedding, she’ll do whatever it takes to give the couple a dream day. But the secret he’s trying to expose might just ruin everything…


Kristin Miller is a great storyteller and I have really enjoyed her werewolf books. WHAT A WEREWOLF WANTS is part of her San Francisco Wolf Pack series and I enjoyed getting to know the new couple.

Josie is a very successful matchmaker and her sister marrying her match brings her successful matching spree up to 100. She really wants everything to go smoothly to land a television special, but the grooms best friend is hell bent on throwing a wrench in her plans. To make matters worse, she is extremely attracted to him and can't seem to get him out of her head. Ryder is a werewolf and is a bit broken when it comes to falling in love. The attraction between him and Josie is pretty intense, but he doubts himself and her ability to love him for who he is so he pushes her away a lot and that becomes a bit frustrating after a while. When the truth comes out about him being a werewolf both Josie and Ryder have some things that need to be worked out.

One thing I really wish this series would do is incorporate the characters from the previous books. All the characters are a part of the San Francisco Pack, but we never see them after their book is over. I really love updates and it makes me sad not knowing how they are doing. It just doesn't feel like a pack to me.

WHAT A WEREWOLF WANTS was a cute story and I was able to read it pretty fast. I think there could have been more detail involved in the storyline and the characters.  I am really hoping that Josie's gift comes up in future books and is able to bring the pack together into one book like I have been wanting. This has been a cute series so far and if your looking for something light, it might just be the series for you.