UFI welcomes Taylor Keating Author of The Guardian Series. Thanks for Joining us!!

I was raised by a teacher librarian. On the surface, I’m sure that doesn’t seem like an earth-shattering revelation, but there’s more to the story.

My mother was also an amazingly patient single mom to four children, and broke up enough fights to qualify her as a referee for Olympic wrestling. She never beat us (although I’m sure she was tempted). Instead, she invested in a set of encyclopedias. Mealtimes became her opportunity to teach three argumentative teenagers and one small Afterthought how smart people fight. The first person who couldn’t back up an opinion with cold hard fact was sent to the bookshelf, including wee Afterthought. Our family arguments could have earned high ratings on reality television. We were before our time.

We thought this was something everyone did until our friends disabused us. Afterthought claims that having to explain this pastime to wide-eyed little playmates both embarrassed and permanently scarred her.  That may be true, but the tradeoff is that she’s really smart. Don’t mess with her when she’s playing trivia games.

All of us turned out to be good at research, although some of us used this talent for evil. I once convinced a jaded young cousin that Santa Claus does, indeed, exist, because Encyclopedia Britannica had an entry for him. Fortunately, (depending on your perspective), she wasn’t an enthusiastic reader and didn’t check past the heading.

These days, we’ve switched up Encyclopedia Britannica for the Internet and tossed our respective children into the fray.

But I’ve never learned to settle for fact. I see too many possibilities. In my world, facts are springboards for the imagination and I have a “friends with benefits” type of relationship with Wikipedia. I know how to verify my sources if I have to.

You want truth? You can’t handle the truth.

Well—maybe you can, but the truth is often boring and life is short. That’s why I like to embellish.  My mom says I’m creative. My writing partner calls me a big fat liar. (My cousin, btw, concurs.)

So I write paranormal.

When my writing partner and I decided to use a video game for our first book, Game Over, I was determined to make the “facts” work for the reader. I spent a lot of time running into a friend’s office to ask her IT questions such as, “Can we run a game using radio signals received from the brain?”

“As long as you add magic,” was her response to pretty much everything. And, “Have you tried looking it up online? Maybe the Japanese have cracked that nut.”

Let me tell you, magic is a storyteller’s best friend. Right after a thesaurus. And Google. Possibly the Japanese, too.  But when straight facts aren’t enough, summon the Wizard. (That’s a reference to the first book, in case you’re interested.)
My point is, you can’t make stuff up and put it in a story, even a paranormal one, without doing some background work. I do an unbelievable amount of factual reading, mostly from books with “for Dummies” in the titles. And Wikipedia.

Mutating viruses, believe it or not, is something I understand all on my own, although I’m sure the professor who taught the course would be appalled to discover how I’ve twisted the facts in order to cross a computer virus with a live one. If only I could have gotten through university relying on my imagination this way. Those lab reports would have been a lot more interesting.

So, for anyone reading the Guardian series, you can rest assured that a plausible level of research went into these books. Then, we summoned the Wizard.

Catherine Verge
A multi published author in the romance genre under another pen name, Catherine is a wife, mom, sister, daughter, and friend. She loves dogs, sunny weather, anything chocolate (she never says no to a brownie) pizza and red wine. She has two teenagers who keep her busy with their never ending activities, and a husband who is convinced he can turn her into a mixed martial arts fan. Catherine can never find balance in her life, is always trying to find time to go to the gym, can never keep up with emails, Facebook or Twitter and tries to write page-turning books that her readers will love.
A maritime native and former financial officer, Catherine has lived all over Canada but has finally settled down in her childhood hometown with her family. Catherine also writes spicy romance under Cathryn Fox and Young Adult novels under Cat Kalen.

Paula Altenburg
The other half of Taylor Keating, Paula grew up in rural Nova Scotia knowing that at some point in her life she was going to be a fiction writer. Swapping Louis L’Amour and Zane Grey books with her father guaranteed she wasn’t going to be the next Jane Austen, much to the dismay of her English teacher mother. A degree in Social Anthropology from the University of King’s College and Dalhousie University in Halifax, Nova Scotia, again meant writing was the logical (meaning only) career path for her, although it did confirm her belief that learning is a life-long experience.
She now works in the Aerospace industry, which surprises everyone who knows her. Happily married, with two terrific sons, she continues to live in rural Nova Scotia but makes a point of traveling as much as she can. New York and Brussels are tied for her favorite cities of all time.
__________________________________ 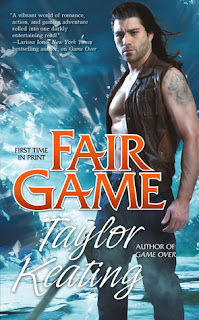 
Video-game designer River Weston has seen her world torn apart. The streets of Earth have filled with looting, sickness, and fighting, but River knows that she is in a unique position to help. Drawing on her Fae magic, she creates a computer-generated program called Hollow Man, designed to protect humans during battle.

Worlds away, Guardian Chase Hawkins has finally returned to his own body after years of astral projection. His mission now that he’s back: retrieve River, who is walking a dark path without even knowing it, and strip her world of the technology that has brought it to ruin.

Hawk and his team arrive on Earth only to discover that River’s new computer program endangers the world all on its own. An old human virus has resurrected and mutated with a computer virus inside of Hollow Man, and it’s spreading uncontrollably. Hawk is convinced it’s too late to save Earth…but River isn’t ready to give up hope yet.

River and Hawk find themselves on opposing sides, yet drawn together stronger than ever before. But a future with both of them in it could mean walking paths darker than either of them could ever have imagined.

a Rafflecopter giveaway
Posted by StacyUFI at 5:25 PM 10 comments:

Review: Tab Bennett and the Inbetween by Jes Young 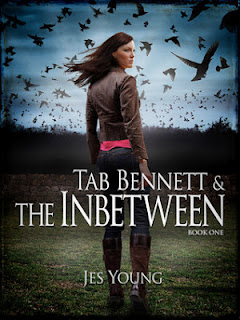 Yesterday Tab Bennett was a bank teller. Today she’s at the center of a centuries old war between Light and Dark. Tomorrow...well let’s just say she’ll be lucky if she lives to see it.


I really enjoyed getting to know Tab and her friends. Its going to be kinda hard to write this review without giving away spoilers but bear with me.

Tab starts out as a normal everyday girl and then finds out that she is anything but and that her family really isn't family but her protectors. The characters are all great. Most of the people we meet are "family" members but they all are very well developed and we get to see different sides of each of them. The different characters that were introduced throughout the book fit in the book perfectly. Tab goes from being engaged to Robbin to finding out that she was meant to live her life with someone else. The love triangle was kind of crazy but I understood it and it played out well. I really liked both Robbin and Alexander so I was not rooting for one or the other but I do feel like Tab was meant to be with Alexander and that she wouldn't be her if she hadn't loved Robbin. The sexual tension between Tab and the two men is absolutely high. There were many times where I just wanted her to do one of them already and get it over with lol. There wasn't a ton of action but the action scenes that were there were fun to witness. I didn't have any issues with the flow of the book and felt everything happened at an easy pace.

Can''t wait to see what happens next and I really cant wait to finally visit the place where she was born and see how Jes Young does with the world building while there. The reviews for TAB BENNETT AND THE INBETWEEN seem to be all over the place but I enjoyed it and will read more books in the series.