Winner: A Wolf at the Door by K.A. Stewart

Prize: Finished copy of A Wolf at the Door

The Winner chosen by Rafflecopter is.....
a Rafflecopter giveaway
Congrats!! I have emailed winner who has 48 hours to respond with mailing address or I will pick another.
Posted by StacyUFI at 9:44 PM No comments:

UFI welcomes Jes Young Author of Tab Bennett and the Inbetween. Thanks for Joining us!!


Last night when I was clicking through the quotes on GoodReads.com (my favorite time wasting strategy) I came across this one from Politically Correct Bedtime Stories a Collection of Modern Tales for Our Life and Times by James Finn Garner:

“The wolf said, "You know, my dear, it isn't safe for a little girl to walk through these woods alone."

Red Riding Hood said, "I find your sexist remark offensive in the extreme, but I will ignore it because of your traditional status as an outcast from society, the stress of which has caused you to develop your own, entirely valid, worldview. Now, if you'll excuse me, I must be on my way.”

When I was a little girl, I wanted a fairy tale life – a handsome prince, an enchanted castle, gourds that would turn into inexpensive and convenient modes of transportation. I watched the Disney versions of the classic fairy tales without knowing that the Little Mermaid traded her tongue to get on land and then ended up dying alone because the prince didn’t love her or that Rapunzel’s real parents traded her to the witch in exchange for a head of lettuce. Blissfully unaware, I danced around the backyard singing “Someday my prince will come.” I waited for the shiny apple that would bring true love’s kiss running to revive me as I lay – surrounded by extremely short men and deeply asleep – in my very own glass coffin.

When I was a teenager, I was surly and angry and much too smart to believe in happy endings. Fairy tales were stupid – especially the Disney versions. Cinderella and Rapunzel were chumps for cheerfully putting up with everyone’s crap. The Little Mermaid was a fool for giving up her life for a man. Snow “I take candy from strangers” White was too dumb to live. I didn’t want to be like any of those stupid, useless princesses. I wasn’t going to waste my time trying to catch the eye of some guy who wore more lip gloss than I did just because his father owned a castle.

Now I am a grown up and although I am no longer quite so keen on eating poisoned apples, neither am I in such a hurry to discount the appeal of an eager to please handsome prince. I find I want fairy tales again – stories about magic, about destiny, about the power of true love and the triumph of good over evil. That’s what draws me to urban fantasy; the genre takes the best elements of the fairy tales I grew up on, shakes them, and makes them into something better. Maybe the princess has a knife collection and a snarky attitude but she is loyal and brave. And maybe the prince has traded in his too-red lips for a facial scar and a past he’s not proud of, but he’s loyal and brave too. Together they’ll win and lose and bleed. They’ll find danger, fight the bad guy, and ultimately save the world. And when they get to their happily ever after, they’ll have earned it.

My book, Tab Bennett and the Inbetween, isn’t based on any particular fairy tale but it does contain the phrase “once upon a time.” There’s a handsome prince and a princess who starts out useless and later learns to kick butt. And, because I am now too smart not to believe in them, when we get there, theirs will definitely be a happy ending.

Where do you stand on the issue of fairy tales? Are they little girl soul crushers or imagination builders? Do you favor the sweetened versions or do you prefer your stories bitter and dark? If anybody has any comments or questions, I’d love to hear them! I’ll check in to reply throughout the day.
Thanks for having me over, Stacy. I really appreciate the chance to talk with you and your readers.
__________________________________

Jes Young was a copywriter at Random House for eight years before leaving the job she loved to be a full time mom to two babies she loved even more. She holds a BFA in creative writing from Emerson College.

Like so many first novels, Tab Bennett and the Inbetween was written between the hours of 11PM and 2AM. 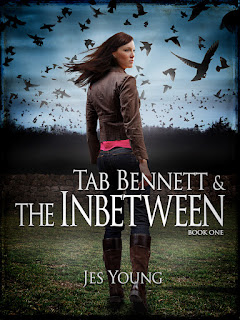 
Yesterday Tab Bennett was a bank teller. Today she’s at the center of a centuries old war between Light and Dark. Tomorrow...well let’s just say she’ll be lucky if she lives to see it.