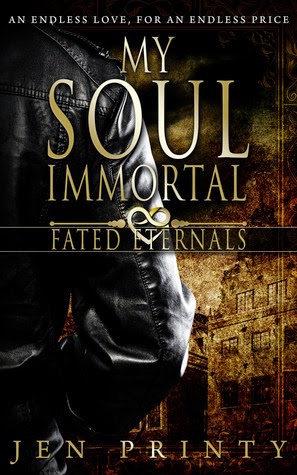 
An endless love, for an endless price.

Jack’s immortality is exposed when he prevents a liquor store heist, forcing him to flee to protect his secret—a secret not even he understands. But when he meets Leah Winters—a mirror image of his decades-lost love, Lydia—his very soul is laid bare. He begins to question his sanity. Is she real, and if so, what does that mean for Jack and his secret?

Jack’s not the only mystery man in town. A stranger named Artagan hints at knowledge Jack is desperate to possess. But can he trust Artagan, or does the dark newcomer harbor deadly secrets of his own?

As Jack’s bond with Leah grows, so does the danger to her life. Jack must discover just how much he is willing to risk in order to save the woman he already lost once.


I almost gave up on MY SOUL IMMORTAL about 20% in but I kept with it. It was not keeping my attention nor was I attached to the characters (which we mainly interacted with Jack at this point). The build up seemed to keep going and going and I just really wanted something to happen already. Thankfully it did get better for me after the 50% mark and by the end I was more invested.

MY SOUL IMMORTAL was pretty heavy on the mystery so I wont get much into the plot to avoid spoilers. I ended up enjoying the characters, especially Leah. I was able to connect to her pretty quickly after she was introduced. She seems to have a lot of faith in herself and Jack and she handled things pretty well. Jack is a pretty complex character. We get to know a little bit about just him in the first part of the book and then get more into the details as the story completes. We are introduced to a few secondary characters and I liked them just fine as well. It feels as though Artagan will have a much bigger role as the series continues.

Although the romance between Jack and Leah is a big part of the book I felt the mystery was just as important. The romance between the two felt real and I enjoyed getting to know their past together as they discovered their future. MY SOUL IMMORTAL ended right after we get some substantial information that makes you want to get a hold of book 2. If I run across the second book I will most likely give it a shot.