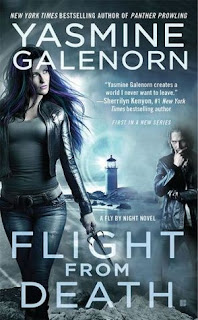 
From New York Times bestselling author Yasmine Galenorn comes an all-new series set in the realm of her Otherworld novels.

I’m Shimmer, a blue dragon shifter. Thanks to a mistake, I was exiled from the Dragon Reaches and sentenced to work for Alex Radcliffe, a vampire who owns the Fly by Night Magical Investigations Agency. Now, not only do I have to adapt to Earthside culture, but every time I turn around, somebody’s trying to kill us. And worse, Alex is as gorgeous as he is exasperating. But you know what they say: All’s fair in love and bounty hunting…

When an old friend of Alex contacts him about a haunting at the High Tide Bed & Breakfast in Port Townsend, Washington, we think we’re on a simple ghost hunt. But our investigation quickly transforms into a deadly fight as we uncover an eighty-year-old murder, a cursed house, and a dark force trapping the spirits within. To stop impending disaster we must break the curse and lay the angry spirits to rest.


I enjoy dragon books and I was really excited to see that FLIGHT FROM DEATH featured a FEMALE dragon as its heroine. The fly by night series is set in the Otherworld. I have not completed Yasmine's Otherworld series and there were a few mentions of stuff happening between Alex and Shimmer that seem to have appeared in a previous book (Otherworld #15.5; Fly by Night, #0.5), so I wanted to mention that so you know going in. I don't feel it took anything away from the story and I wasn't really lost, but it probably would be nice to have read it going in.

Shimmer is an interesting character. She has been exiled from the Dragon Reaches and stripped of most of her magic. She's working at the Fly By Night Magical Investigations Agency during her punishment, but she actually likes working there. I thought she was a strong character. We learn about her in little bits throughout the book instead of finding out everything we needed to know in the beginning.

There is some romance between Shimmer and Alex. We find out in the beginning of the book that Shimmer is drawn to Alex and then find out the feelings are returned a tad bit later in the story. They don't really have time to be together with the case they are working, but when they do find time, they are as hot together as you would imagine after meeting them.

I think I might have went into FLIGHT FROM DEATH with too high of expectations. I thought the book was interesting, but I wasn't totally sold on it. I liked the main character and some of the secondary characters definitely kept things interesting. I had a hard time getting completely into the case the characters were working and the resolution didn't blow my mind. I however did like the book enough to want to read book 2, so I say that the start of the Fly by Night series was nice.