Once by Dana Michele Burnett 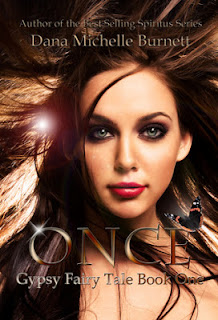 
ONCE is pretty short, sweet, and to the point. Just like this review. The story flowed nicely and included a good amount of mystery and details. It does read like a fairytale but it had a great modern feel to it.

Harmony moved back to town to take care of her Grandmother and as her Grandmother was dying she told Harmony to lock the doors and don't let anyone in. I never really understood while Harmony's Grandmother was so freaked out in the beginning of the book. The day of the funeral the Irish Travelers come to town and here starts the story of Harmony and Kieran. The romance was quick to start and progress, the characters were interesting and the plot was fun.

I was a little disappointed by the ending, but I guess it leads you to want to read book two so I will just have to wait and do just that.