My bookshelf is drowning in books so I'm giving some away. Some are finished copies, some are ARCs, some might not be UF or PN but what is mine will become yours if you are the lucky winner. Here is a picture of what you will definitely be getting and there is a very good chance more will be added to it before they ship out.

**CLICK READ MORE TO GET TO GIVEAWAY ENTRY FORM** 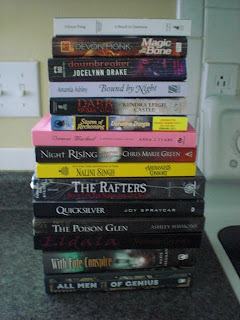 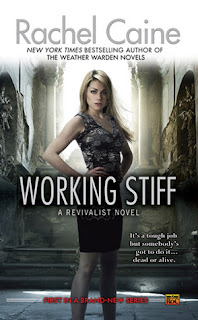 
Bryn Davis knows working at Fairview Mortuary isn't the most glamorous career choice, but at least it offers stable employment--until she discovers her bosses using a drug that resurrects the clientele as part of an extortion racket. Now, Bryn faces being terminated--literally, and with extreme prejudice.

Wit the help of corporate double-agent Patrick McCallister, Bryn has a chance to take down the bigger problem--pharmaceutical company Pharmadene, which treats death as the ultimate corporate loyalty program. She'd better do it fast, before she becomes a zombie slave--a real working stiff. She'd be better off dead...

I was pleasantly surprised with WORKING STIFF. I'm not crazy about the cover so I wasn't overly excited to pick this book up but I saw some 5 star reviews from reviewers I usually agree with so I traded for it. Bryn is former military and decides to work in a funeral home. On her first day everything starts out ok until she ends up working late and seeing things she isn't supposed to and is murdered. Only she doesn't stay dead, she is resurrected with a drug that keeps her alive as long as she keeps getting the shots on time and if she doesn't help catch the dealer supplying the drug on the black market she wont be getting her shots anymore.

The whole concept and story was very unique. I was engrossed in the story from the beginning. Bryn turns out to be very intriguing, strong, and all around a great heroine. Although  she had her "why me" moments she kept on going and doing what she needed to do. Patrick starts out being so so. I didn't really like him a whole lot in the beginning but he slowly grew on me and when I got to know him a little better I really started to enjoy his character as well. Their romance is gradual and flows into the rest of the story well. I really liked Joe Fideli. I kinda actually thought him and Bryn would end up together until I found out he was married with kids and happy lol, he really was a down to earth loyal guy though. WORKING STIFF was a tiny bit disturbing, full of action & suspense and an all around a great read. I am looking forward to book two.