UFI welcomes Author Susannah Sandlin. Thanks for Joining us!!


The Challenges of Ending a Series
Susannah Sandlin

Okay, I’ll ‘fess up here. I love series. Love reading them and writing them. I fall in love with the characters and it’s had to say goodbye to them.

Sometimes, however, it’s time for a series to end—either because the planned story arc has come to a logical conclusion or because the publisher decides it’s time. And so, for both reasons, I found myself faced with writing ILLUMINATION, which brings the primary story arc of The Penton Vampire Legacy series to an end.

There are challenges to writing the end of a series that you don’t have to worry about in an ongoing story. In a paranormal romance series, each book generally focuses on a single couple where either the hero or heroine are part of a larger group. In the case of the Penton series, the heroes have all been residents of the vampire enclave of Penton, Alabama, engaged in a war for survival as vampires starve following a human pandemic whose vaccine rendered the blood of vaccinated humans poison to vamps.

I had several major challenges in writing ILLUMINATION.

First, in the last book, ALLEGIANCE, I introduced a couple of shapeshifters and a human Army Ranger into my vampire story. The Ranger was the one I wanted as the hero of the last book, and the heroine is human. What kind of vampire series has humans as the h /h of its final book? Well, there’s an obvious answer to that problem, but I’ll say no more.

Second, I had my new hero and heroine—Nik and Shay—for ILLUMINATION, but since this would be the final book in the series, I wanted readers to be able to see what the previous “supercouples” were up to. Aidan and Krys had an ongoing storyline, but I also wanted Mirren and Glory, Will and Randa, Melissa and Mark, and Cage and Robin to be really involved in the storyline….without losing track of Nik and Shay’s growing relationship.

There also was the big story arc that needed to reach a plausible conclusion—the looming civil war between the Penton vampires (i.e., the good guys) and the Vampire Tribunal leader (i.e., the nasty, evil guys).

And finally, I wanted to leave the door open to use these characters in a different series or standalone if I want to and if the fans want it.

Did I meet all the challenges of ending the Penton Legacy series?

Susannah Sandlin writes award-winning paranormal romance, including the popular Penton Legacy series for Montlake Romance, and romantic suspense and thrillers, including two series, The Collectors and Wilds of the Bayou, also for Montlake. Writing as Suzanne Johnson, she writes the Sentinels of New Orleans urban fantasy series for Tor Books. Suzanne grew up in Alabama halfway between the Bear Bryant Museum and Elvis’s birthplace and lived in New Orleans for fifteen years, so she has a refined sense of the absurd and an ingrained love of college football and fried gator on a stick. She currently lives in Auburn, Alabama, where she is a full-time author who does copy editing on the side through Reedsy.com. 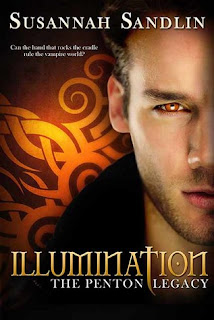 He came to Penton seeking peace. Nik Dimitrou joined the Army to escape his family curse, only to have his psychic abilities exploited as a weapon. Now, as a civilian, he turns to the bottle to veil the images that come unbidden whenever he touches anyone–except vampires. With them, he has finally found a respite. But as Penton moves into open warfare with the Vampire Tribunal, Nik finds himself deep inside the conflict, not to mention fighting a transformation in his own body more frightening than anything he’s faced.

She wanted to change the world. Shay Underwood watched her Peace Corps parents move from one third world country to another, helping others–until both died following an outbreak of Dengue Fever. Driven to pursue a career in tropical medicine, Shay works in New Orleans to cure the disease that killed her parents–until a careless weekend outing draws her into a world far more dangerous than the diseases she studies: a desperate vampire society engaged in human trafficking.

“Right then. We have an obscenely large vehicle on the other side of that brick wall,” Cage said. “Archer or Nik should be able to help you over. Once I’m sure you’re in the car and locked up tight, I’ll collect Robin and Glory from the cemetery entrance and we’ll all be on our way back to Penton.”
Shay bit her lip. She had absolutely no reason to go to Penton, wherever the hell it was.
Her home and life and work were here in New Orleans. She knew she’d have to be careful, but now that the breeding house was broken up and Jonathan was dead, the vampires and their minions had no reason to come after her. Whatever feelings Shay had nursed for Nik Dimitrou in high school, they were long dead. Gorgeous only took a person so far. Besides, he was a vampire.
She’d wait until they got her out of this cemetery, though, to decline her visit to Vampire Central. Maybe the handsome cat boy would drop her off somewhere. But where? She had no money or identification with her. She didn’t even have the keys to her own apartment or lab.
Maybe a police station. They could come up with a plausible story for her disappearance. Maybe even name Simon as her kidnapper, and the warehouse location. Let the authorities make of it what they would.
Shay was distracted by the sight of Archer leaping to the top of the brick wall behind the Le Boeuf crypt, followed closely by Nik. Her old classmate might be injured and hungry, but that wall had given him no challenge. Shay wasn’t sure she could climb over it without a sturdy ladder on a good day. Today had not been a good day except that she hadn’t died.
Nik reached down and motioned to Shay. “C’mon, let’s get out of here.”
Shay looked at the wall, at Nik, and back at the wall. “I don’t think you can lift me. You’re hurt.”
“Trust me.” Nik grinned, giving Shay a glimpse of an older, even more handsome version of the boy she’d known so many years ago. She’d thought she loved that boy; this man, though….was a vampire. Don’t forget that, idiot.


She nodded, dried her hands on her jeans as much as she could, and reached up toward Nik. He leaned over, wrapped strong fingers around both of her wrists, and lifted her to the top of the wall with what seemed like little effort, setting her down beside him.
“Swing your legs over, and I’ll lower you down the other side. Or I can leap down with you in my arms.” His grin widened, and her heart beat double-time when their gazes locked. Vampire. He’s a freaking vampire. He’s a freaking vampire involved in a war with other freaking vampires. You cannot trust him. Lust, yes. Trust, no.
“Whatever you do, would you please move your arses?” Cage stood beneath them. “I’m getting soaked and—”
A loud pop sounded from the Washington Avenue end of the cemetery, followed by a splintering noise and another pop pop. Shay had lived in New Orleans long enough to recognize the sound of gunfire.