The Deepest Well is the first book in a new urban fantasy trilogy that is an offshoot of the popular Vessel Trilogy series. 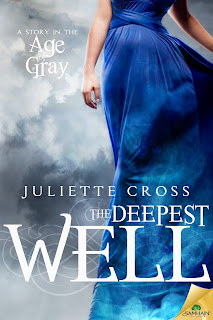 Lady Katherine Blakely is married to a monster. On the same night she witnesses how low her husband can sink, she meets a charming stranger, a gentleman from top to toe. Yet even her gallant rescuer is possessed of a dark side.

Lord George Draconis Thornton, commander of the Dominus Daemonum, is on a mission to expel the demon prince Damas back to the underworld. But a golden-haired beauty derails his plans and stirs an attraction he’s never felt before, not even for his centuries-dead wife.

Discovering Lord Blakely is in league with Damas, George sweeps Katherine away from the chaos and devilry threatening her life. With every touch, their love grows by joyful leaps and bounds.

Sensing his enemy’s vulnerability, Damas kidnaps Katherine to his hellish lair, where he wages a sensual assault on her defenses. As George tears at heaven and earth to find her, he is painfully aware of only one way to save her soul. The cost will break her heart…and destroy his own.

Warning: Contains wolves in gentlemen’s clothing, a precipitous descent into Hell, and a frightening glimpse of a post-apocalyptic world where angels and demons wage war for dominion on earth.

“The characters, story line, and setting are all wonderful. I enjoyed it from the first word and didn’t put it down until I was done. I can’t wait for Juliette Cross to release the next book so we can see where Jude and Genevieve go from here.”
—Fresh Fiction on Forged in Fire

“Action packed, fast paced and steamy, I recommend to any paranormal romance enthusiast. Sealed in Sin can stand alone, however, you won’t want it to. Like Pringles...you can’t just have one...feast upon this cracky goodness!”
—Smexybooks

“How do you know about the world of demons, George? How did you move as they did? I thought I had fainted by the pond and awakened beside the barn, but I didn’t, did I?”


Had she imagined being transported from the horses to the barn in a long blink?


“No, you didn’t faint. It’s called sifting. A power of the angels, to move from place to place at will.”


“But they weren’t angels.”


Fallen angels. Could this be possible? What did that make the man standing before her? He inhaled a deep breath and let it out slowly. “Perhaps I should define the two realms for you.”


“That would be lovely.”


“Fire, in Latin, which is the common tongue between the heavenly and demonic hosts.”


She pulled her hand from his and stood, staring into the flames. “Why fire?”


He joined her and removed his wet coat. “I asked the same question once.” He winced as he peeled the coat off his right arm. A pool of red had soaked through his undershirt.


Just as he had unbuttoned her jacket, she swiftly unfastened his waistcoat, then his shirt and peeled them off him. Steering her gaze away from his finely sculpted chest and broad shoulders, she examined the cut more closely. She bent over and, with a quick rip, tore a long strip from her shift.


“You needn’t do that, Katherine.”


He held his arm straight so that she could wrap the fabric around his arm.


“Why fire?” she asked again, busying herself with the makeshift bandage.


“Flamma are all touched by fire, an otherworldly power given to each of us.”


She remembered the way he moved, the way the demons moved, with supernatural speed and agility. A drop of rain dripped from his tousled hair, landing on his shoulder before rolling forward. She followed its path as it slid down and over his pectoral. Trying to regain her composure, she inhaled a deep breath, which was a mistake. She breathed in the heady scent of rain and beautiful man, her agitation amplified by his proximity and the undeniable power surging through his body. She longed to touch him, to know what all that strength would feel like under her fingertips, but she was paralyzed by her own desire and wavered on a dangerous precipice. When she’d cinched the bandage into a neat knot and finally chanced a glance at him, his smile nearly buckled her knees.


“There,” she whispered. “That will stop the bleeding.”


His shoulders went rigid as if he were holding himself in tight control. Katherine knew his thoughts had wandered away from the wound in his arm. She asked again, “What do you mean, George?”


His eyes slid closed. “I love to hear my name on your lips.” He opened his eyes again, his jaw set in grave lines. “What I mean, my lady, is that I am bleeding inwardly, and I know of only one way to stop it.”


Katherine was well aware of the tension filling the room, of the rise of her heart rate, of the longing in his gaze, which surely matched her own. She realized she was tumbling over that cliff. And she didn’t care, quite content to drown in his aquamarine gaze.

Juliette is a multi-published author of paranormal and urban fantasy romance. She calls lush, moss-laden Louisiana home, where the landscape curls into her imagination, creating mystical settings for her stories. From the moment she read JANE EYRE as a teenager, she fell in love with the Gothic romance--brooding characters, mysterious settings, persevering heroines, and dark, sexy heroes. Even then, she not only longed to read more books set in Gothic worlds, she wanted to create her own.