“My name is Rafe Montana. I’m looking for Danny. I’m a bail enforcement agent.” At her blank look, he qualified. “A bounty hunter.”


She frowned. “You don’t look like a bounty hunter.”


“Maybe if you took those sunglasses off, you would see me better.”


She’d forgotten she had them on. No wonder it was so darned dark in the house. Then he took a step forward, and she came to attention. “Bounty hunter, huh? Like a guy who chases down bail jumpers? Who’s going to bail you out when I have you arrested for breaking and entering?”


He halted and reached toward his back jeans pocket. “I can show you my license.”


“Hey, hey— hold it right there. Hands out of the pockets.” She gestured with the pepper spray and hoped he didn’t notice her trembling. “Maybe I should just call the cops and let them sort this out.”


“Go ahead.” Dropping his hands to his sides, he took another step. “They know I’m here. It’s all legal.”


“Hey! Stay right there and I won’t have to use this.”


“Calm down. I’m not going to hurt you. When’s the last time you heard from Danny?”


“None of your business.”


He sighed. “Didn’t you hear what I said? I find people for a living.”


“Maybe.” Her heart pounded, her mouth dry. “All I know is that you broke into my stepbrother’s place.”


“I could hand you the phone, and you could call the police. Clear this up.”


“Or you could stay right there and I could use my cell.” Trying to hold the pepper spray steady with one hand, she rummaged in her purse with the other, keeping her eye on him. Just as her fingers closed around the phone, he moved. Anticipating a blow, she tried to fire the pepper spray, but he ducked beneath her outstretched arm and grabbed her from behind, pinning her arms. He jerked her right off her feet, her back against his chest. Her purse and phone went flying. So did the pepper spray.


“Hey!” She struggled to pull her arms free. Damn, he was strong. And powerful. And determined, if his unrelenting grip was anything to go by.


“Easy,” he said. “I told you I wouldn’t hurt you, but with you waving that pepper spray around, I couldn’t be sure you wouldn’t hurt me.”


“So you just picked me up off the floor? Great way to make me trust you.”


“If I wanted to do something to you, Cara, I could have done it at any time. The pepper spray wouldn’t have stopped me.” 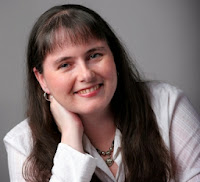 Debra Mullins is the author of thirteen historical romances for Avon Books and one paranormal romance for Tor/Forge. Her books have been translated into several languages and nominated for awards from both the magazine RT Book Reviews and Romance Writers of America and its chapters, including the Golden Heart, the RITA, the Holt Medallion (twice), the Book Buyer’s Best Award, and the National Readers Choice Award. She also won the Golden Leaf Award for Best Historical for her book, A NECESSARY BRIDE.

Debra has spoken at various RWA chapter meetings, as well as the national RWA conference, the Liberty States Fiction Writers conference and the Emerald City Writers’ Conference in Seattle. In August 2009, she gave a full day special event for the Orange County chapter of Romance Writers of America with author Charlotte Carter, where she spoke on the topics of character and conflict.

Born and raised in the New York/New Jersey area, Debra now lives in California and has been actively writing for over twenty years. A language nerd, she could speak four languages by the time she graduated high school. At age 16, she went to France on a student exchange program for a summer. By the time she came home to the U.S., she was dreaming in French. 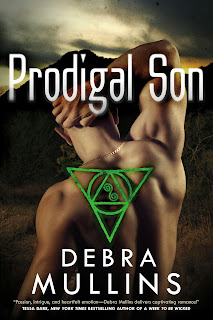 
Bounty hunter Rafe Montana is a Seer, descended from the fabled Atlanteans. He uses his inherited power to “see” criminals across the globe and track them down, and he’s just started on a new case. Danny Cangialosi is accused of disappearing with a stolen car…but for the first time in his life, when Rafe goes looking, he is unable to “see” him. Instead, his search leads him to Danny’s stubborn, meddling, and very cute stepsister, Cara McGaffigan.

Cara is looking for Danny, too, but not to turn him in. He is her brother, after all, and she’s convinced he has a good heart. If she can just find him before the cops do, she’ll figure out a way to get him out of this. But Cara didn’t count on a scorching-hot bounty hunter getting in her way.

Despite instant chemistry, Rafe and Cara know they’re never going to see eye-to-eye when it comes to Danny. What they don’t know is that Danny didn’t just steal a car—he stole a precious stone, a stone right out of the legends of Atlantis. It holds powers they can only dream of…and its owner wants it back.