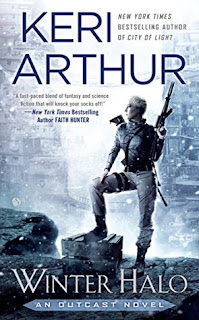 
From the New York Times bestselling author of the Souls of Fire novels comes the second in the futuristic fantasy series that will make you want to keep the lights on...

Now Tiger must summon all her gifts to stop those responsible for both atrocities—no matter the cost to herself..


I had a little bit of a harder time getting into WINTER HALO than I did book one and I didn't love it as much as CITY OF LIGHT, but I still thoroughly enjoyed it.

Tig continues her search for the remaining missing children, but she also finds herself in the middle of investigating the pharmaceutical company that Sal's partners are involved in. There is less action involved in WINTER HALO, but plenty of undercover work going on. I think it made things seem a little slower, but the action scenes that were in the story helped amp things up.

The relationship between Tig and Jonas continued to cause me immense frustration throughout the book, but it did get a teeny tiny bit better in WINTER HALO. I look forward to seeing what these two will do together in the future when they aren't totally despising their attraction to each other.

I really enjoy the OUTCAST world and characters and will continue reading it with book three.