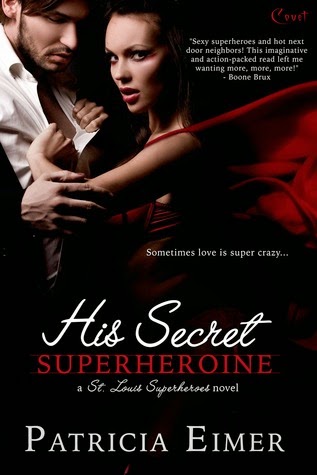 
All kindergarten teacher Peyton Pearson wants is a nice, quiet life. Unfortunately, quiet isn't something she's had a lot of after tainted medicine turns her into a superhero. She's single, and saving the city from criminals—which is increasingly dangerous as the anti-superhero movement in St. Louis gains traction. Then there's her hot next door neighbor who makes her think super-dirty thoughts, and has no idea who she really is.

Police officer Dylan Wilson is trying to make the world safe by working to unmask all superheroes. When his sexy neighbor, Peyton, is evicted, Dylan offers her his spare room, unknowingly opening his home—and his heart—to the city's most reluctant superhero.

Can love survive when the masks come off?


Peyton's just trying to live a normal and quiet life. Unfortunately normal and quiet was shoved out the window when her ex-husband switched out her birth control pills with a medication that made her into a superhero just like him. Now divorced all she wants to do is teach her students, and pine after the handsome police officer across the street while staying under the radar. When she is evicted, her sexy neighbor Dylan offers up his spare room, only problem is he doesn't like superheros and has no idea she's really Fantastigirl in hiding.

As you can imagine the romance between Peyton and Dylan is anything but smooth. The secret is out pretty early on in the book which is good but a lot of hurt comes out of it on both sides. There were many tissue needing moment so be prepared. I really enjoyed the relationship between Peyton and Dylan's Daughter. She is pretty much the mother figure to this little girl since her mother is a drunk B and it was great to see the feelings develop between the two.

I enjoyed all the secondary characters and the storyline. HIS SECRET SUPERHEROINE was a great start to the St. Louis Superheroes series. I am definitely going to look for book two. If you haven't already read it, Patricia's Speak of the Devil Series was very enjoyable as well and since it has already ended you won't have to wait for a new release!