UFI welcomes Sarah Zettel Author of The American Fairy. Thanks for Joining us!!

I'm a life-long magic geek. I love reading about magic, writing about magic, seeing movies about magic. I love stage magicians. I grew up on all kinds of fairy tales. I breathed it all in like oxygen, from the Brother's Grimm to The Wizard of Oz to The Lord of the Rings. When people ask where did you get your ideas for American Fairy from, that's where.

Down time? What's that? In addition to writing, I've got a husband and a 12 year old son which keeps me very busy. But, when there's time, I enjoy reading, music, travel, and camping.

Unwrapping a brand new shiny idea. That's the most exciting part, the realization that this is something, I could do something with this, something exciting and entertaining...

I started writing when I was pretty young, twelve or so. So, I learned to write wherever I could find space and quiet. I can still do that, which is a real help when it comes to being able to write in a crowded, busy life.

Hmmm...let's see. I'm going to broaden this a bit to include horror and fantasy in general. To touch on the classics of the genre, I'd have to go with Ray Bradbury as one of the Greats and of course Stephen King. The author who turned me from a reader to a writer was Ursula K. Le Guin. For more current writers, I'd say Gail Carriger, Ann Aguirre, Holly Black, and Erin Bow (oh, Erin Bow! Plain Kate was one of the best YA fantasies I've ever read!).

How would you pitch The American Fairy Series to someone who has not heard of it before?

Fairies in the Dust Bowl.

Can you tell us a little bit about the world that The American Fairy Series is set in?

The main setting is America in the 1935. It's the height of the Great Depression. Magic is real, but hidden here and the two great "courts," of magical beings, the Seelie and the Unseelie, have entered the human world via thin spots in the shifting fabrics between the worlds. Callie has lived all her life in the Dust Bowl town of Slow Run, Kansas. She believes her father to be a jazz musician and a black man. She's right, but what she doesn't know is he's also a prince of the Unseelie Court who gave up his crown for love. Callie's quest to find the truth about her family and her own powers takes her from the middle of the worst dust storm in US history, to Kansas City, to golden age Hollywood, to the sprawling city of Chicago, and to all the variations on the fairy kingdoms that they hold.

Do you have a favorite scene in Bad Luck Girl ?

I'm very fond of the scene with Jack's brothers where Callie absolutely loses it and lashes out with the full force of her powers. It is exciting and satisfying to write a character driven to an extreme, even when you know This Does Not End Well.

All of them. That's really not me being cute. Once you start digging into the heart of a book, all characters become more difficult. Each one has to make sense withing their own view point, and each one has to fit the larger narrative. It's a constant journey of discovery, and a constant balancing act

I have a historical series, Palace of Spies, which is set in the court of King George I. The first book PALACE OF SPIES is out now, and the second book DANGEROUS DECEPTIONS will be out in November.

Thanks for letting me come "chat." 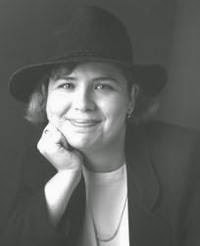 Sarah Zettel is an award-winning science fiction and fantasy author and one of the founding members of Book View Cafe. She has written fourteen novels and a roughly equal number of short stories over the past ten years in addition to practicing tai chi, learning to fiddle, marrying a rocket scientist and raising a rapidly growing son. She is very tired right now. 
After rescuing her parents from the Seelie king at Hearst Castle, Callie is caught up in the war between the fairies of the Midnight Throne and the Sunlit Kingdoms. By accident, she discovers that fairies aren't the only magical creatures in the world. There's also Halfers, misfits that are half fairy and half other--laced with strange magic and big-city attitude. As the war heats up, Callie's world falls apart. And even though she's the child of prophecy, she doubts she can save the Halfers, her people, her family, and Jack, let alone herself. The fairies all say Callie is the Bad Luck Girl, and she's starting to believe them.

A strong example of diversity in YA, the American Fairy Trilogy introduces Callie LeRoux, a half-black teen who stars in this evocative story full of American history and fairy tales.