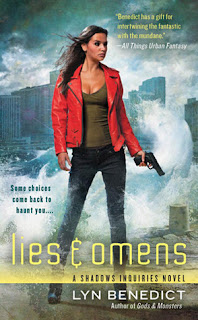 
Sylvie Lightner is a P.I. specializing in the unusual—in a world where magic is real, and Hell is just around the corner. After escaping secret government cells and destroying a Miami landmark, Sylvie’s trying to lay low—something that gets easier when a magical force starts taking out her enemies. But these magical attacks are a risk to bystanders, and Sylvie can’t let that slide.    When the war between the government and the magical world threatens the three people closest to her—her assistant, her sister, and her lover—Sylvie has no choice but to get involved with hidden powers bent on shaping the world to their liking. Now, with death and disaster on the horizon, even if Sylvie wins, things will never be the same...


The Shadow Inquiries series continued with plenty of action, frustrating romance and otherworldly type creatures aplenty. Sylvie once again has to save humanity from the magical world and those hell bent on destroying the ISI with no care who falls into their path.

Sylvie is kick ass, loyal and full of surprises. We continue to get a peek into what being the New Lilith entails for Sylvie while continuing to keep us (and her for that matter) in the dark.  We get a hot and sexy shower reunion scene between Sylvie and Demalion. I'm really not sure what my feelings are towards Marah, I honestly can not tell what her motives are and who's side she is on. Erinya brings lots of excitement to the series but she is a bit out of control now that she is a god and I cant imagine what she will do next or how Sylvie will deal with it.

I really liked how LIES & OMENS ended. It felt like all the key players are finally on the same side in the same fight. There is a great lead up to book 5 worked in. I wont be missing a release in this series anytime soon.

Black Dawn (The Morganville Vampires #12) by Rachel Caine
Body and Soul (The Ghost and the Goth #3) by Stacey Kade
Deadlocked (Sookie Stackhouse #12) by Charlaine Harris
Demon's Bride (The Hellraisers #2) by Zoe Archer
Destined (Wings #4) by Aprilynne Pike
Elemental by Emily White
Embrace of the Damned (Brotherhood of the Damned #1) by Anya Bast
Heart of Brass (Wardens of the Realm #1) by Kate Cross
Insurgent (Divergent #2) by Veronica Roth
The Impossible Cube (Clockwork Empire #2) by Steven Harper
In the Company of Witches (Arcane Shot #2) by Joey W. Hill
Kiss of the Goblin Prince (Shadowlands #2) by Shona Husk
The Peculiars by Maureen Doyle McQuerry
The Seven Year Witch (That Old Black Magic #2) by Jodi Redford
The Shifter by Jean Johnson
Shine (Shade #3) by Jeri Smith-Ready
Silence (The Queen of the Dead #1) by Michelle Sagara West
Sparks Fly (Light Dragons #3) by Katie MacAlister
Sweet Evil by Wendy Higgins
Under Suspicion (Underworld Detection Agency #3) by Hannah Jayne
The Vicious Deep (The Vicious Deep #1) by Zoraida Córdova
Wrecked by Anna Davies


Happy Reading!!
Posted by StacyUFI at 2:30 AM No comments: