UFI welcomes Jennifer Harlow Author of Justice. Thanks for Joining us!!

Urban Dictionary Definition of a Mary Sue:
A female character in FanFic or original stories who is so perfect, so superior to all other characters, so powerful,she's annoying. Often based on the author.
(See Ana Steele, Bella Swan, TV Sookie Stackhouse)

Jennifer Harlow Definition of a Debbie Harry:
A female character who is flawed in many ways but does her best to overcome and accept them, is mouthy or prickly, strong or finds her strength, and who has to work for all she has, especially love.
(See Anita Blake, Kinsey Milhone, Lizbeth Salander) 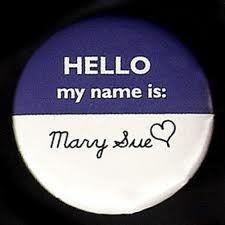 I consider myself a tough broad. I have a mouth on me, dirty a lot of the times, I've walked through dangerous cities at night alone, I've seen someone assaulted and got my friends out of the situation while keeping a calm head, and I've kicked not one but three dudes in the balls when they wanted to play rough and I didn't. I can shoot a gun, change a tire, I kill spiders and open jars for my brothers, and I take shit from no one. I'm not ugly but it takes over an hour for me to become pretty. The only things I'm exceptional at are dispensing advice, storytelling, and keeping fish alive (Beta Larry lived 2! years). I'm stubborn, solitary, I have no sex appeal or mojo, and I live with my parents.  In other words, I am not a Mary Sue. I am a human being, flawed yet still fabulous. And so should your main character be.

I came across the term "Mary Sue" when I read an article on "Fifty Shades of Grey" (yes, I read the book. Got it from the library. Wasn't great, wasn't terrible, read it in about three hours.) Like most blockbuster books, there was some derision about it, especially from authors. So much was said but for the purpose of this blog I'll just focus on the main character Ana. She was definitely a Mary Sue: perfect, every male falling over her, had the supernatural gift of having mind blowing orgasms every time. The woman would not exist in the real world.

In this article (which I'm sorry I can't remember the name of, sorry) the author also mentioned that this type of character a "Mary Sue" was prevalent in Fan Fiction, which is how Fifty got its start. The term came into existence when Paula Smith wrote a short story about the type of female character prevalent in Star Trek FanFic. Mary Sue was only fifteen, a genius, the youngest lieutenant, with unprecedented skill in everything both mental and physical, and is beloved by all characters in this case especially Spock and Kirk. Mary Sue has no flaws, she struggles at nothing, and everyone fawns over her. In other words, she's boring. Unbelievable. Those are the worst words any writer can face.

If Mary Sue kept herself contained in the pages of FanFic I'd really have no problem with her. Full disclosure, I don't read or write FanFic. My roommate was obsessed with it, especially Wincest (EWWWW) and Harry Potter/Draco Malfoy parings. I understand the desire to write them. These are characters you love, and in writing the Fic you get to tinker with those characters however you see fit. You put yourself into this fantasy world. You're in control. But before Fifty no one was really making money on it. Now publishers are checking the sites for the next Fifty. Besides the copyright issues, my main concern is that more characters like Ana (a copy of Bella Swan) are going to be the norm. The only acceptable female lead will be demure, gorgeous, subservient, basically a feminist like me's worst nightmare. Ana let a man tie her up and spank her just to please him. Bella literally became a teenage bride, got knocked up, then DIED in childbirth. This is what has captured the minds of American women. It gives me chills.

When it came time to write my latest book, Justice, I made the conscious decision not to let my main character Joanna be anything close to a Mary Sue. In fact, what makes her special is that she is not special. She is a normal police officer who lives among superheroes and villains. She cusses like a sailor, drinks too much, makes tons of bad decisions, and nothing comes easy for her. Yet she’s also excellent at her job, owns up to her flaws, and loves with everything she has. When my agent was shopping the book around one of the reasons editors gave for not publishing it was Jo was too tough. She wasn’t “feminine” enough, whatever that meant. She was the kind of woman who if someone punches her in the face, instead of crying and shutting up, she spits blood right back in his. In other words, she's wasn’t perfect, and there's a reason for that. Perfection is boring. Who would you rather hang out with, spend money on? Little Miss Perfect Mary Sue or flawed, funny, tough Debbie Harry? Me, I'd rather spend an hour with an interesting shit than a whole day with a super nice person. You get more from Debbie than Mary Sue. 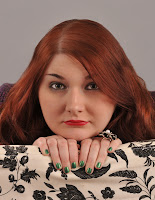 Jennifer Harlow spent her restless childhood fighting with her three brothers and scaring the heck out of herself with horror movies and books. She grew up to earn a degree at the University of Virginia which she put to use as a radio DJ, crisis hotline volunteer, bookseller, lab assistant, wedding coordinator, and government investigator. Currently she calls Northern Virginia home but that restless itch is ever present. In her free time, she continues to scare the beejepers out of herself watching scary movies and opening her credit card bills. She is the author of the Amazon best-selling F.R.E.A.K.S. Squad and Midnight Magic Mystery series. For the soundtrack to her books and other goodies visit her at www.jenniferharlowbooks.com 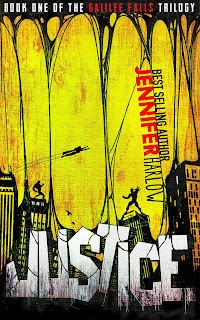 
It’s hard being a regular police officer in Galilee Falls, a city with the highest concentration of superheroes and villains in the country. It’s even harder watching your best friend, the man you’re secretly in love with your whole life, planning to marry another woman. Detective Joanna Fallon has to contend with both. When the vilest supervillain in the city’s history, Alkaline, the former crime boss who can shoot acid from his wrists, escapes from the maximum security prison, the whole city is gripped by panic. Leading the pursuit is Captain Harry O’Hara, Joanna’s boss and secret lover, and the city’s champion superhero Justice, who caught the villain last time, much to Joanna’s chagrin. Before her father was murdered in a mugging twenty years earlier, Joanna worshiped the hero, but when he disappeared and failed to save her father, that adoration turned to contempt for all supers. After Alkaline attacks too close to home and targets Joanna as his next victim, tough-as-nail Joanna has to contend with her increasing fear while struggling to choose between her life-long crush and her new-found love.

The wolves are at the gate.
I count thirty police officers on my security monitors, including SWAT, all armed to the gills led by him. I always knew this day would come. It has been almost twenty years in the making, but now it’s here…this must have been how Nero felt as he played that fiddle. My Rome is burning. Soon my freedom will be gone and yet I could still manage a tune.  First things first.
Waverly, one of my loyal employees these two years, runs into the study. His fear does not inspire confidence. “Sir, what are we supposed to do? The police and—”
“Stop sniveling for one,” I say, taking a sip of my Scotch. I will miss this.
“Did Grace—”
The bullet I put between his eyes stops the rest of that sentence. I don’t have time to answer a million questions. Company’s coming. I down the rest of my drink as I run the electromagnet over my computer. Cleaner than the day I bought it. Must leave things tidy. I’ve already set the timers in the file cabinets. Thirty more seconds before, like Nero, all that remains of my empire is ashes.
The bombs detonate as I walk down the hall, no louder than gunshots but still rocking the walls sprinkling dust on my paintings. I wonder what will happen to my art. Probably sold for victim reparations. The Degas alone will cover the cost of the library we destroyed today. Smith and Rees are waiting in what is left of my living room. Just looking at it, especially what’s left of Bradley under that bloody sheet, I feel embarrassed for myself. I never lose control like that. I don’t know what I was thinking. I suppose I’m paying the price now.
“Sir, where do you want us?” Smith, a five year veteran of my service, asks.
I turn over the couch with a sigh. “Gentlemen, I want to thank you both for your loyal service through the years. You have both been invaluable. I wish things could have gone a different way. I apologize.” I fire a single shot into Smith’s forehead. Poor Rees is too shocked to even draw on me before he meets the same ending. The loose ends are no more. The rest is in the hands of the fates.
The last of my security doors fall, the sound of steel hitting marble echoing through the room. I cross my leg, wipe the speckles of dust off my costume, and put a smile on my face. The bane of my existence, the man I hate, who has consumed my life for years, super-speeds into my living room as if he owns it. And the press calls me arrogant.
“Alkaline,” he says beneath that dark mask.
“Justice,” I say with a nod. We stare at each other for a few seconds, even now locked in battle. “Grace?”
“She’s safe. You can’t hurt her or anyone else ever again.” He pauses for dramatic effect, or to savor his victory. “Will this be easy or hard?”
For a moment, I consider an attack. It always gives me almost orgasmic pleasure when my fist hits his body and he cries out in pain. One last taste for the road? No, I quell this urge. My body has not completely healed from our fight a few hours ago and quite frankly, I need a break. Being the scourge of the city is exhausting. “You may take me to jail now.”
As I’m led out past the frightened police and gawking bystanders, I keep that smile on my face. Not because I’m arrogant, not to save face, because…I may have lost this battle, but the war has just begun.
Then Rome will truly burn.
__________________________________
Posted by StacyUFI at 3:00 AM 3 comments: