UFI welcomes Author Megan Linski. Thanks for Joining us!!

My brand new dystopian fantasy series, The Rhodi Saga, just released this month! I’m so thrilled that these books are finally available. What’s more the main character, Dylan Fairsson, has a birthday coming up on October 10th! To celebrate, I’ve picked out the top five presents Dylan would love to receive on her big day.

1. Dylan can transform into a tigress, so even though she’s not a girly girl, she’d love this plush toy from Ty to sit on her bed.

3. Dylan loves sports, so to give her something to play with her best friend, Tito, and to honor my Detroit heritage, I’m giving her a hockey stick. She’s such a tomboy, so she’d love to skate around on the ice with a puck, knocking Tito over. I’m sure she’d have a great time!

4. This shamrock charm is similar to the one given to her by close friend (and maybe something more), Enfys Baugh. Dylan would wear this bracelet everyday.

5. Dylan has a twin brother, Devin, with whom she shares a birthday, so it wouldn’t be right if she got all the presents. Devin is a big nerd, obsessed with books, science, and video games, so this Xbox console would provide a great excuse for brother/sister bonding time.

Megan Linski is the owner of Gryfyn Publishing and has had a passion for writing ever since she completed her first (short) novel at the age of 6. Her specializations are romance, fantasy, and contemporary fiction for people aged 14-24. When not writing she enjoys ice skating, horse riding, theatre, archery, fishing, and being outdoors. She is a passionate advocate for mental health awareness and suicide prevention, and is an active fighter against common variable immune deficiency disorder. She lives in Michigan.

Megan Linski also writes under the pen name of Natalie Erin for the Creatures of the Lands Series, co-authored with Krisen Lison. 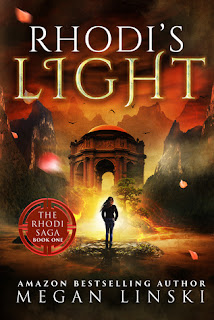 
Flight. Hyperspeed. Clairvoyance. These are some of the powers gifted to the Rhodi, an ancient sect of assassins who defend Crescentia, a dystopian world with a dying hope.

Dyliana Fairsson is one of them. After losing her parents to a suspicious accident, she and her twin brother, Devin, join the Rhodi to avoid starvation. Under the direction of her master, Dylan struggles to learn the strength of her magic …as well as hide the growing scars on her wrists.

Can Dylan become the warrior, the hero, she’s destined to be? Or is she fated to fall from the light into the darkness?


“Dylan! Dyliana, wake up! Get out of bed!”
The girl sleepily raised her head off the pillow and looked around, her sharp eyes piercing the darkness. Her father stood beside the bed, fully dressed and standing as straight as a board. He was pretending to be calm, yet she knew better. The face her father wore was one that she knew all too well, the one she hated and yet was frightened of at the same time. It was an expression of urgency, of fear.
“It’s time. Your mother is getting Devin up. We have to leave now.”
Dylan shook her long hair out of her face. “But I don’t…”
“Now’s not the time. Come.”
The small fifteen year old pushed back the covers and jumped out of bed, her day clothes on. She knew better than to go to sleep in pajamas anymore. What was the point? They always seemed to flee in the night.
She was a very pretty girl, with golden skin and particular orange eyes that glittered fiercely even in the darkness, but you’d never know it by the sour expression on her face. She wore baggy, tomboyish clothes and her dark black hair was tangled. She swept it sloppily beneath a hat as she clambered drowsily to her feet.
“That’s my girl. Grab your bags.” Her father handed her a suitcase, a large bag of his own by his side. Her father was muscular, rugged from years of hard work with stubble crowding his face. His black hair was trimmed short, his golden skin beaming and radiant. The feature his daughter could see most in the shadows were his two green eyes, vibrant and unrelenting in hope. She didn’t understand how that hope could still be there after they’d been uprooted so many times.
Dylan bent down and took hold of her suitcase, wanting to dawdle but knowing that if she did they could all be in danger. She slipped on her shoes and followed her father out into the hallway, down the stairs and to the front door.
“Is everyone ready, Yeshua?” a woman asked, her voice a low whisper. The full moon outside trickled through the window and lit up her face. She was a tall woman with long, wavy dark hair that nearly fell to her hips and orange eyes just like Dylan’s. Her face was exotic, the look of a desert heiress. That face had thin eyebrows that narrowed in worry.
“As ready as we can be, Kilim. How’s Devin?” the man asked.
“Sleepy,” a voice at Kilim’s side said. A boy Dylan’s age yawned and blinked at his sister. Although nearly identical in features, it was obvious from the beginning that the twins couldn’t be any different. There wasn’t a hint of a wrinkle in the boy’s neat clothes, and his glasses were polished to perfection, though too large for his small green eyes.
“You’ll get over it,” Yeshua promised. “We’re leaving now.”
The family picked up their bags and headed out of the house. As they passed through the front door Dylan noticed a window had been broken during the night. She wanted to ask what had happened but thought better of it.
After everything had been loaded into the car the four of them set down the road, only taking their bags. They left the rest of their possessions behind. The family hardly cared. It wasn’t like they had much to call their own in the first place. The two teenagers looked back as they abandoned their home, but the adults seemed to sag in relief.
“Where are we going this time?” Dylan asked with a sigh. It seemed like they were always running...always scared.
“Out of Marceleno,” Yeshua said. “And into a state called Areos. It’s very far away, but it’s closer to your aunt and uncle. We’ll have to cross several borders.”
“Out of Marceleno?” Devin repeated and Dylan’s heart sank. They moved constantly, but never out of their own country. Marceleno was their home. How could they leave that behind as well?
“We’ve switched countries before,” Kilim reminded them.
“That was when we were babies. It doesn’t count.” Dylan crossed her arms.
“Marceleno is too close to the Far East. It’s not safe to stay here anymore,” Yeshua said.
Nowhere is safe for us, Dylan thought dully, watching the willow trees rush by her window unhappily. Marceleno was beautiful with its gondolas and small stone streets, buildings that sat by long rivers crowded with artists and musicians. Areos was probably very different.
“Does Uncle Keaton know we’re coming?” Devin asked.
“No. It’s better if only we know, for now.”
Dylan made an irritated sound and shook her head. She wished that her parents would let her know who was after them or why. Whenever she asked she was only told not to speak of it. It hurt that her parents didn’t trust them enough to let her or her brother know what was going on, even though it consistently interrupted their lives. After awhile bitterness had begun to sink in. She gave up asking, and just supposed that if whoever was after them caught them she would die or be kidnapped without ever knowing why and that would be the end of it.