Review: City of the Lost by Debbie Cassidy (@amoscassidy) 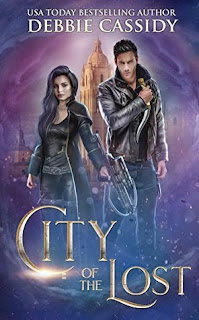 When life gives you lemons, punch it in the face.

Time is running out for Wila and Azren as the meeting with the dragon liege looms, and Wila is no closer to locating the rogue Shedim base. Death by dragon seems like a definite possibility according to the voice in the basement.

With the Lost loose in the city, and the arcana Institute twiddling their thumbs, it’s up to Wila and Co to clean up the mess, prevent general panic and make sure they get home in time for a proper cup of tea.

Add several mechanical monster’s hell bent on attacking civilians into the mix, and we have a recipe for a case that’s out of this world. But with her jade-eyed shedim partner, an Arcana royalty, a draconi prince, and her troll blood lover at her back, no foe is unbeatable…right?

It’s going to take several slices of lemon cake for the gang to get through the week, but Wila has a plan.

Unfortunately plans have a way of derailing themselves where the dragon liege is involved. Wila is about to be tested, and when the lights go out how loud will she scream?

Join Wila as she continues to kick butt, turn heads and unravel mysteries in the thrilling second installment of the Chronicles of Arcana.


I was ready to jump into CITY OF THE LOST as soon as it hit my kindle.

We get some nice development on the storyline, but I honestly can't say there was a whole lot of character development on Wila's part. Who and what she is, is still a giant mystery and I hope we get some tidbits about her soon. I really want some hints about the guy locked up in the basement too. Quite a bit is revealed about Azren and his people. I am excited to learn more as they learn more.

There is a ton of action. People are hurt and there are a few moments where you're not so sure they might come out of stuff.

Again, just like I mentioned in book one. The romance is VERY slow burn. Frustratingly slow at times, but we do have some progress in that department in CITY OF THE LOST. The sexual tension is very high throughout the book though and I'm still not totally sure who all the men in the harem will be.