Review: Lie Down With Dogs by Hailey Edwards 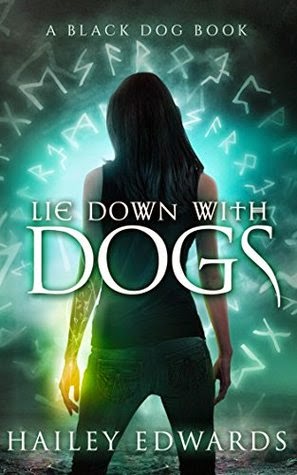 
With tentative peace established in Faerie, Thierry returns to her job as a conclave marshal in Texas while the countdown to her coronation begins. But what happens in Faerie doesn't always stay in Faerie. A crown wasn't Thierry's only souvenir from her trip. Her new husband, Rook, is scheming again, and this time his plans are invading her dreams.

When her best friend throws a beachside going away party, Thierry is grateful for the distraction from Rook...and from Shaw. But her presence in Daytona rouses an old evil, one who wants the future queen as the crown jewel of his private collection.


Poor Thierry, she does NOT have a good time in LIE DOWN WITH DOGS. She has a crown laying over her head she doesn't want, she has a phone stalker, her best friend's family is no longer behind her, and her new bodyguards aren't on her side like she thought they were.

I was SO torn over the whole Shaw V.S. Rook dilemma after reading HEIR OF THE DOG, but I think LIE DOWN WITH DOGS did a really good job of finally making me choose a guy to root for. A lot of things were revealed and it was easy to see who I think would be better for Thierry. I really liked Shaw in book one, despised him in book two and fell in love with him in book three. Not sure what will happen next with him and Thierry, but I'm sure it will be good.

The ending? Mind blown, I had no idea and I'm really interesting in reading the next book to find out more about Thierry's Dad. Lots of action, lots of things revealed, and lots of character development in LIE DOWN WITH DOGS.