Guest Blog: Shadow of the Moon by Kwen D. Griffeth

UFI welcomes Author Kwen D Griffeth. Thanks for Joining us!!

The Story Behind the Story
Guest Blog – Kwen D. Griffeth

The most often comment I hear about “Shadow of the Moon,” is “Why on earth would you write a fantasy werewolf story?”

My response always starts with a smile.

A few years ago, I read a trilogy written by a well-known author, and part of the story was the experiences of a female werewolf. Out of all the fantasy stories, i.e., the Mummy, Dracula, Swamp Creature and such, the werewolf has always been my favorite. In the telling of the story I referenced, I felt the she-wolf was cheated.

When in human form, the character was tough, intelligent, educated, and determined. When forced to change by the moon, she became little more than a wild dog chasing rabbits through the woods. Her ability to shapeshift indeed was a curse.

Fast forward several months and the story was still with me, and a nugget of an idea started to form. I decide to write my own story, and I begin by doing weeks of research about the history of the werewolf, as well as the social order of actual wolf packs. My theory was a family of werewolves would fit somewhere within that structure.

You may know that according to legend, Rome was founded by two brothers, Romulus and Remus, who were nursed by a she-wolf. Is it a leap of logic to say these brothers were the offspring of the wolf? It has never been documented that wolves are kind to orphans. Point two, later, Romulus killed his brother and then named the city Rome, after himself. Such actions are not limited to wolves but certainly would fit the violent nature of the animal.

Perhaps the best beginning of the wolf is the story of Lycaon, a Greek, who tried to trick Zeus. As a punishment, Zeus transformed Lycaon into a wolf and forced him to remain so for many days. Later, he changed him back, and the ability to shapeshift was complete and was a gift from a god. Lycaon went on to father many sons, fifty in fact, and he is said to have started the Lycaean Games, which led to the Panathenaic Games and thus the Olympic games.

I particularly like this part. The old man has fifty sons, all of whom needed wives. He doesn’t start a university, as his boys aren’t the brightest. Nor does he build a debating hall, again, the boys are not so articulate. What his boys are, is the biggest, the toughest, the fastest and the strongest of all the men in the area, so Dad starts physical contests in an effort to marry them off.

Accurate or not, such was one side of the story that came to be known as “Shadow of the Moon.” The other side was the social behavior of wolf packs. Lone wolves usually do not survive as the dynamics of the pack determines survival. I took that to mean werewolves have stable, as well as extended, families. The wolf pack is a matriarchal society; so must the werewolf family be.

Last, the werewolf would be conflicted. On the one hand, they would be some of the toughest and meanest of us. They would be athletic winners as well as leaders in combat if they could accept the rules of society. If not, they would undoubtedly be capable of being the cruelest of serial killers. They would be the best of us and the worst of us. Underneath it, all would be the fear of extinction, as they are also the least of us.

“Why would you write such a story?” is the most common question I hear.

“You almost made me believe in them,” is the most common statement. 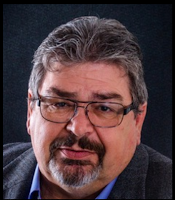 Winner of Readers' Favorite Silver Award for Historical Fiction/Western, Kwen knew he wanted to be a writer when he was fourteen years old. He felt the urge when he finished Earnest Hemingway’s masterpiece “For Whom The Bell Tolls.” The story touched him in a way no other book ever had. It transported a kid born and raised on a farm and ranch in Idaho to the mountains of Spain. It took him back in time forty years to witness the Spanish Civil War. Kwen knew he wanted to share that wonder with other people.

John Lennon said, “Life is what happens while you make other plans.” While Kwen lived a full and varied life, his dream of writing remained in the back of his mind.

Finally, in 2012, he wrote a novella named Dear Emma. He self-published through Amazon and asked people to read it. “The best way to see if I can write is to let people check it out,” he said. Like it, they did. Currently, Dear Emma enjoys a 4.8 out of 5 stars rating on Amazon.

Often asked what genre he writes, Kwen replies he writes stories about people and uses the genre that best fits the story. “I think of the genre, or setting as another character that interacts to help tell the story,” he says.

His most often received and constant comment is how real his characters seem. Upon the completion of his historical fiction trilogy Sam and Laura books, a reader telephoned Kwen and directed him to write more stories about the couple. When asked why the reader was so adamant about more stories, he replied he “wasn’t ready to tell Sam and Laura good bye yet.”

Kwen considers that comment one of his highest compliments.

Kwen’s books are available in several formats; e-Book, paperback, and audio. He invites you to check his writings out. Who knows? He might become your next favorite author. 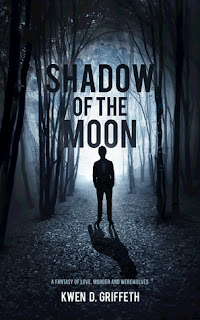 Shadow of the Moon
Shadow #1
Amazon


The grisly murder of a diplomat’s son in Central Park draw NYPD Detective Gerald Meeker and FBI Special Agent Andee Trakes into a twisted and confusing investigation. Within hours, the evidence indicates the man was executed in the manner saved for werewolves. Andee Trakes is assigned to liaison with a history professor, who is an expert on folklore and legends.

Professor Alwyn Lloyd, handsome, articulate and successful, not only agrees the method of death was indeed an execution, he claims to be a werewolf. Andee is torn between the desire to date the man and the suspicion to arrest him.

From the initial killing in the park, a bloody spree is ignited that soon has Andee and Lloyd forced to work together to protect themselves and family members.

Shadow of the Moon explores the world of werewolves and paints a picture of what is good about them, as well as bad. The story explains what is beautiful as well as ugly about the wolf.

The story is fast paced and full of interesting characters and several twists and turns to keep both the fantasy as well as the suspense and romance enthusiasts entertained.


“I’m Professor Lloyd’s assistant. Is he expecting you?” Her smile never wavered, though the hand dropped to her side.
“No, as I said, I’m with the FBI, and we don’t normally make appointments.”
Miranda, with smile still in place, walked to the door leading to the professor’s office as she said, “Let me check with him, but I’m sure he will be able to meet with you. I keep his appointment calendar, so I know he’s not overly busy.”
“Hey, I was here first, and I’ve waited thirty minutes.”
Trakes turned back to the office and noticed a blonde had stood to announce her displeasure. She tried to show her indignation with the agent, but her glare fell short.
Trakes smiled at the student and held out her FBI credentials for the blonde to see.
“I’m with the FBI, sweetie. We get cuts.”
Behind her, she heard Miranda say, “Sit down, Shelly, you know as well as I do the professor won’t change your grade.”
Trakes turned back to Miranda and waved the credentials one more time.
“These are really the only announcement I need, but thank you. I’ll just pop in. Then the professor and I will get acquainted.”
Before Miranda could object, the agent turned and stepped through the door.
Her first impression of the office was the desk. It was large, made of wood and appeared antique. The floor was wood, with a large rug that covered most of it. Like the outer office, this one was also wainscoted with dark wood paneling. Opposed to the other space, this one was painted an off-white the rest of the way to the 10-foot ceiling. Again, keeping with the theme set by the outer office, this one also had pictures and paintings on every wall. Bookcases, shelves and glass cases flanked the desk, with two chairs centered in front of it. A two-person sofa along the wall to the left and a coffee table finished the décor. Professor Lloyd sat behind the desk.
He studied papers with his head lowered, and her first glimpse of him took in the breadth of his shoulders and his hair. It was thick and dark, almost black down the center of the head, but shaded to grey by the time it reached the man’s ears. It was combed back, but a natural part down the center caused it to fall to each side. She wondered what it felt like, then forced herself to refocus.
As she stepped through the door, Trakes announced, “Good afternoon, I’m…”
He looked up from his papers.
The eyes were a pale blue. Ice blue. The shade of blue used to sell breath mints, and her intake of air seemed fresher as it travelled to her lungs. The eyes were hard and unwelcoming. Andee wished she had waited to be announced. She stepped into the room and tripped on the edge of the rug. She whispered a curse, caught her balance, held her blush to a minimum and muttered an apology.
“I’m sorry. I shouldn’t have…”
Those eyes, still focused on her, softened enough to indicate his irritation at the interruption had grown into a mild curiosity. As he studied her, he allowed an eyebrow to raise and his head to cant to one side. She suddenly felt exposed, and her blush from the ungainly entry deepened. Her heart paused, and then quickened. Her stomach tickled, then settled into nervousness. Her underarms damped and a question about deodorant flashed through her mind. She tried again to introduce herself, but discovered she had forgotten her name.
“Professor, I’m…a…I’m…”
Her words came in a small squeak. It may have been the squeak a mouse makes when she sees the hawk dive, but it was certainly the squeak of prey. She froze. The corners of his mouth turned.
“Uncle Alwyn, you stop this. Stop it, right now.”
The commands came from Miranda, and the professor looked past Trakes to his niece, who was standing in the doorway. As he broke eye contact, Andee gulped air. She realized she’d forgotten to breathe.
“Uncle Alwyn, I’m ashamed of you,” Miranda continued, and she took Andee’s arm and assisted her to one of the chairs in front of the desk. Andee smiled her gratitude as she felt dizzy. She looked up at the assistant, who smiled down at her.
“Don’t mind my uncle. He does that sometimes. It’s because he is an Alpha.”
“He’s a what?”
Andee felt as if she was clearing a fog.
“He’s an Alpha, and sometimes he takes advantage.”
“An Alpha? Is that a fraternity?”