Early Review + Giveaway: Blood of the Earth by Faith Hunter 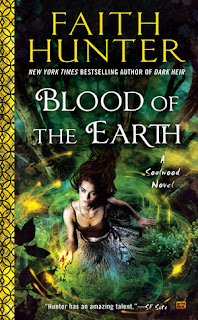 
Set in the same world as the New York Times bestselling Jane Yellowrock novels, an all-new series starring Nell Ingram, who wields powers as old as the earth.

When Nell Ingram met skinwalker Jane Yellowrock, she was almost alone in the world, exiled by both choice and fear from the cult she was raised in, defending herself with the magic she drew from her deep connection to the forest that surrounds her.

Now, Jane has referred Nell to PsyLED, a Homeland Security agency policing paranormals, and agent Rick LaFleur has shown up at Nell’s doorstep. His appearance forces her out of her isolated life into an investigation that leads to the vampire Blood Master of Nashville.

Nell has a team—and a mission. But to find the Master’s kidnapped vassal, Nell and the PsyLED team will be forced to go deep into the heart of the very cult Nell fears, infiltrating the cult and a humans-only terrorist group before time runs out…

I had not read OFF THE GRID before jumping into BLOOD OF THE EARTH, so I had no idea who Nell was before jumping in. I didn't feel like I missed anything, but if I could go back, I would read it just to get to know Nell a little better before jumping into her part of the world because I loved her and wanted more. Nell is nothing like Jane Yellowrock, but she is just as kick ass in her own way. For someone that has been so sheltered she still have a great understanding of how things in the world worked and her reasoning skills made her an essential part of the PsyLED team she found herself thrust into helping.

Even though I think Nell is awesome, the secondary characters definitely helped to make BLOOD OF THE EARTH more of a success for me. I really liked how the PsyLED team just came into Nell's life and started treating her like part of the team and one of their own—even if she didn't particularly want any of them in her life in the beginning. I just loved how different each of them were, but how close they were to each other. I should also mention that I actually didn't hate Rick in BLOOD OF THE EARTH. I still have some big issues with him, but I don't despise him as much and even understand him a little better.

I will absolutely be continuing with the Soulwood series. In fact, I can not wait to get my hands on book two. Thankfully I wont have to wait too long, CURSE ON THE LAND is set to release November 1, 2016.

US and Canada Only