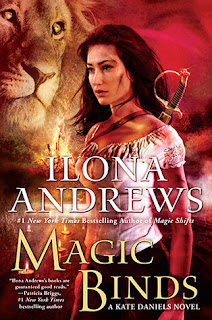 
Mercenary Kate Daniels knows all too well that magic in post-Shift Atlanta is a dangerous business. But nothing she’s faced could have prepared her for this…

Kate and the former Beast Lord Curran Lennart are finally making their relationship official. But there are some steep obstacles standing in the way of their walk to the altar…

Kate’s father, Roland, has kidnapped the demigod Saiman and is slowly bleeding him dry in his never-ending bid for power. A Witch Oracle has predicted that if Kate marries the man she loves, Atlanta will burn and she will lose him forever. And the only person Kate can ask for help is long dead.

The odds are impossible. The future is grim. But Kate Daniels has never been one to play by the rules…

I have massive love for Kate Daniels and her squad of friends and family. Every single book in this series has drawn me in and spit me out at the end with a massive craving for the next book. MAGIC BINDS was no different.

Kate and Curran are finally heading down the isle, but like anything else in their lives, they have to get through a lot of shit to get there. The emotions...oh the emotions... the 'feels' in MAGIC BINDS are pretty big and you are going to feel it all at every turn. Kate doesn't hold her punches —or her tongue for that matter—in any situation, big or small and as usual, there are a lot of situations to be had.

We find out a lot of information in MAGIC BINDS. Not only do we get to know more about Roland and his past, but we find out some big things about the mystery that is Christopher. On top of that, there is a lot of happenings going on with the Pack as well as the People. And Julie, when did she grow up? She really has changed a lot since she was introduced and I could seriously see her with her own spin-off series at some point down the road and she is going to be totally badass—she kinda already is. Months after reading MAGIC BINDS and I'm still kinda reeling about all that happened in book nine.

I have been WAITING for the ending that MAGIC BINDS offered, but I was still shocked when it actually came and it left me wanting the next book more than ever before. Gordon and Ilona are fantastic storytellers and they will always have a place of honor on my book shelf. Can't wait until book ten!