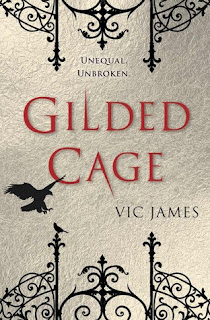 Our world belongs to the Equals — aristocrats with magical gifts — and all commoners must serve them for ten years. But behind the gates of England's grandest estate lies a power that could break the world.

A girl thirsts for love and knowledge.

Abi is a servant to England's most powerful family, but her spirit is free. So when she falls for one of the noble-born sons, Abi faces a terrible choice. Uncovering the family's secrets might win her liberty, but will her heart pay the price?

A boy dreams of revolution.

Abi's brother, Luke, is enslaved in a brutal factory town. Far from his family and cruelly oppressed, he makes friends whose ideals could cost him everything. Now Luke has discovered there may be a power even greater than magic: revolution.

And an aristocrat will remake the world with his dark gifts.

He is a shadow in the glittering world of the Equals, with mysterious powers no one else understands. But will he liberate—or destroy?


GILDED CAGE took me a little bit to get into, but once I did, it was easy to keep reading.

There really is a lot going on in GILDED CAGE. Not only with the characters, but the world and events that take place too. The world itself is run by the equals—they have magical gifts. The commoners—no magical gifts—are forced to serve the equals for 10 years of their life. They are slaves for that entire time with no rights and are not treated very well. As with any situation like this, there are those that don't agree with the system and throughout GILDED CAGE a revolution erupts and lines are blurred.

I think my biggest issue with GILDED CAGE was that there were a lot of different POV's. I'm not a big fan of jumping around in different brains and it was a little hard for me to have so many to jump around in. Having said that, I did enjoy the characters of GILDED CAGE. They were all well developed and brought different things to the story. I was really surprised by most of them at one point or another while reading.

I was less than thrilled with the ending of GILDED CAGE, but can't really explain why due to spoilers. I was left with a lot of questions and very little answers, but I am interested in seeing what will happen next and what will become of a certain character that pretty much lost what they were at the end.