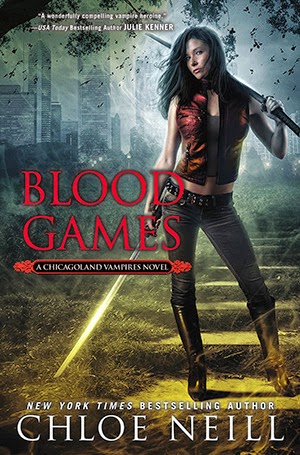 
While Merit didn’t choose to become a vampire or Sentinel of Cadogan House, she vowed to fight for her House and its Master, and she’s managed to forge strong alliances with powerful supernaturals across Chicago. But even though Merit has had wild adventures, this may be her deadliest yet...

A killer is stalking Chicago, preying on humans and leaving his victims with magical souvenirs. The CPD hasn’t been able to track the assailant, and as the body count rises, the city is running out of options. Vampires and humans aren’t on great terms, but murder makes for strange bedfellows. Can Merit find the killer before she becomes a target?

This series has a featured spot on my bookshelf and with every book in the series I am reminded why I love it. Murder, mystery and a fight to lead the GP are all featured in BLOOD GAME. If that isn't enough to get you excited we also have the continued romance of Merit and Ethan.

It's crazy to think about all that has happened to Merit in her short year as a vampire. She has grown so much and so much has happened that it feels like so much longer. She is pretty much the champion of Chicago with all she has saved them from and with BLOOD GAMES she does it again. There really isn't much more I can say about her that hasn't already been said in previous reviews, but she continues to be at the top of my fave heroines list.

I really enjoyed watching as Merit and Malory repaired their relationship more. Are they 100% back to where they were before? No, but they have a new friendship blooming and it was nice to see their easy banter and love for each other shining through again.

You know from the last book that Ethan decided run for leader of the GP. Well, he isn't the only one and a big part of BLOOD GAMES revolves around the competition with one of his competitors for the top spot. The trials are not easy and the fact that his competitor is involved with some of the troubles the Cadogan house is dealing with makes it that much harder. Thankfully Ethan and Merit's relationship remains strong and they are able to lean on each other through the hard times.

BLOOD GAMES didn't go exactly as I thought it would, but I am pretty excited about everyone's future. I am still waiting for the big elephant in the closet to happen and I will continue reading each and every installment that Chloe writes in hopes that it will happen sooner rather than later, but I bet we will have to wait a long time. Until then ... WOOT WOOT, another great installment of the Chicagoland Vampires.